he running year usually starts with the lovely 30 km Bay  2 Bay run, from Camps Bay along the coastline to Hout Bay – and back.

It’s a very popular run with a very tough hill which you have to climb twice.

During the first half, it’s not too bad, since you climb over a distance of some 10 km, while on your way back, with 16 km in your legs, you climb the same hill within just 2 km.

It’s been my goal again to finish the run in sub 2h 30 min, which I was able to deliver.

The organization was good in general, but I do not know who placed the km-markers. I was at 2 km after 6 min 30, at 10 km after 39 min,… Someone was really not paying attention at all, neither to the marker they placed, nor to the real distance. Two or three times the distance between the markers were as little as 300 m 😉

I’m happy that I had my Polar watch, telling me the pace. Pacing yourself during the race with completely unreliable km markers is impossible…. 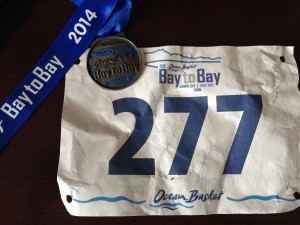 I’m more or less happy with the time. Due to my last 6 weeks of very consistant training I was hoping for a better time. On the other hand I did no do any serious speed work at all, and therefore I can be happy.

The weather was very good, about 20°C, clouds and the wind was only there for 3-4 km.

This is my pace chart (the figures in the bottom line are not the km marks. It’s just the number of times when I did a “lap” on my Polar = I took my split time.And the pace was actually a little bit faster, my watch measured 28.5 km instead of the real 30 km.

Bay2Bay Elevation Chart 2014 (Thanks to Andrew Shepherd for the chart)