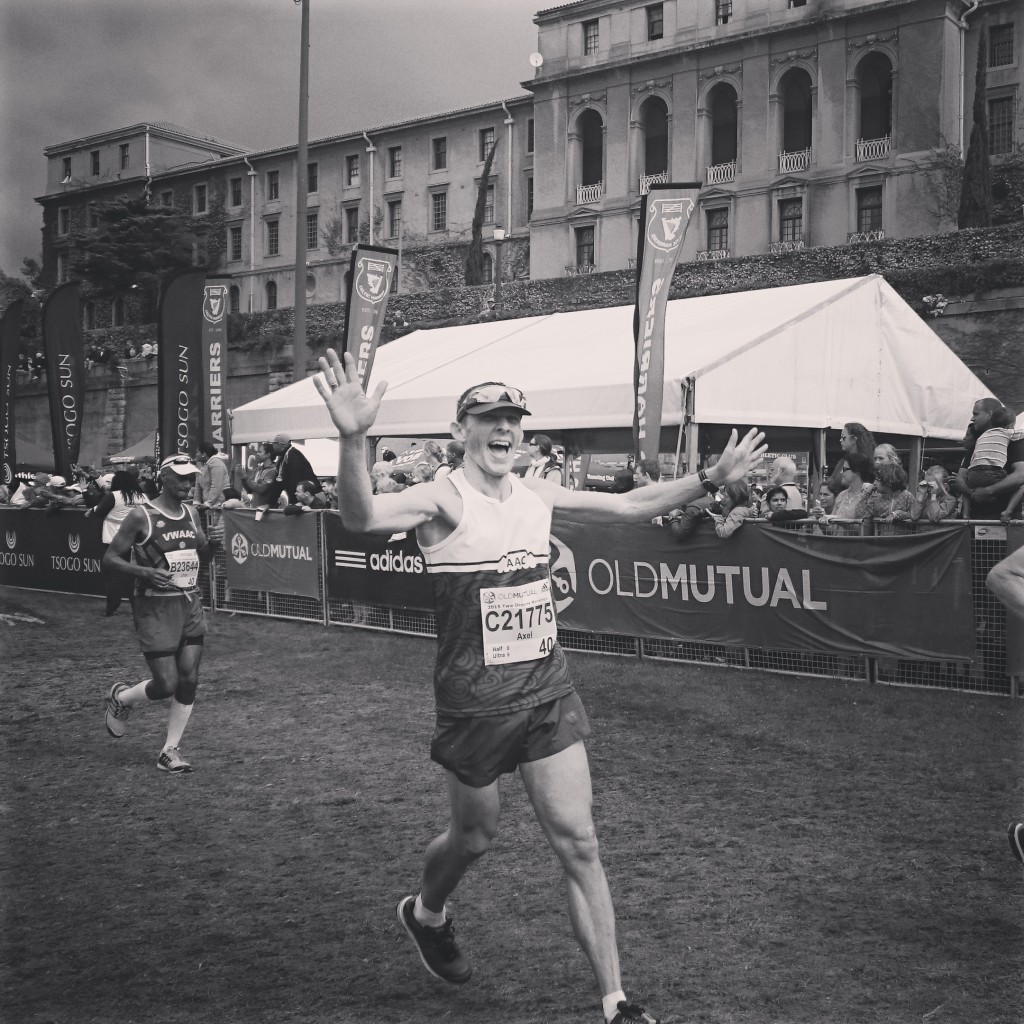 Number 7, I can’t believe that this is the already the seventh time I take part in the most beautiful marathon in the world.

This year I was happy and lucky during my preparation – no injuries, no illness, and a new training strategy I felt very confident with. The only small issue was a tummy issue which started three days before Oceans. I thought it was caused by a very healthy lunch I had with maybe too many lentils. Little did I know…

Running the same race for the seventh time takes away the nerve wracking questions in your mind, so I enjoyed being at the start.

But one thing was different this year: We did run another route than usual. The devastating fire around the Cape Peninsula in March was the reason the wonderful Chapman’s Peak Drive was declared unsafe for runners and we had to run the alternative route. A route that was used also back from 2001-2004. Luckily I knew the most challenging part of the new route already, a 7 km uphill section, from my 53 km training run a few weeks back.

My race strategy: Hold yourself back during the first half, while running a pace giving me the opportunity of finishing in sub 5 hours but not attacking right from the start. My main goal this year is a sub 9 hours Comrades.

All went well in the beginning, I felt good, the pace was good and the weather turned out to be really pleasant – with lots of clouds and even some slight rain for a very long time. That’s race weather how I like it. My pace was solid and in the area of a sub 5h finish.

When I started eating some food, I realized that my tummy had not recovered completely. I started taking in food after some 50 minutes and every 25 – 35 minutes thereafter. And whenever I ate something, 2-3 minutes later my tummy started to get very active. I did not have to stop to go to the toilet, but it was a bit uncomfortable. So far.

After 26 km or so we were running up the 7 km uphill section of Ou Kaapse Weg. Although this long incline is really long, I experienced it as pretty runnable. I met a few friends from my running club and also 2 Dutch guys I met the day before at the International Friendship Run. Ed and Marco brought with them 100 shirts (not on race day but the days before) and swapped them with other runners to build a bond between the shirt owners. I find it a really nice idea. So it was nice to meet them again during the race.

When I reached the top after some 33 km the toughest part of the race was done. At least from a running perspective. I still fell ok, but my tummy did not get better. On the downhill section, which is only 3 km long and therefore very steep, I held myself back to avoid crashing my legs. It also worked well.

Then the problems began, when I had to cut back the amount of food I was eating. My nutrition followed my new pizza & raw food strategy, which in general now is my preferred nutrition. No, the pizza is not raw, but the energy bars I consume are. After about 37 km I could not really eat anything any more. I also held myself back from drinking too much sugar water and preferred pure water throughout the race. I believe I compete better if I do not overload my body with sugar, and rather eat more solid food like the date/nut-bars and some pizza. If the digestive system works…

Back to my tummy. I crossed the marathon mark after some 3h 50 min or so. A bit too slow for a sub 5 h finish. For the last few km before the marathon mark I was wondering if it might be a good idea to visit a toilet. I held myself back for a while, because who wants to waste time on the toilet during a race – until I realized, that I really needed a toilet. Really.

What did help in the meantime was a tip I read just one day before the race in the book of Scott Jurek “Eat & Run”: Breath into you tummy. So I focussed a lot of my attention to my breathing and this did relax the tummy area. Was I happy that I read this book 🙂

As Murphy’s Law also applies to runners, from that moment on I was looking for one of those mobile toilets they provide at most, but not all, water tables. And of course at the next water table there was no toilet. So it took me about 4 km to get to the next toilet. I went there and let me just tell you, that I spent more than 10 minutes insight this nice blue box…

What a relief. I immediately felt much better and for the last km the running became easier. I still did not eat, but I could run better. The sub 5h finish was long gone, so I enjoyed the last km.

All the time during the race I thought of my beloved wife Silke and wondered, how her Half Marathon might go. I felt, that everything would be fine, and when I entered the finish area at the University of Cape Town sports filed, I spotted her and our friends Julia and Silke at the International Tent. She had her medal around her neck. I stopped, spoke with her, kissed her and eventually made my way to the finish. Seeing her was the best and most important and emotional moment of my race. 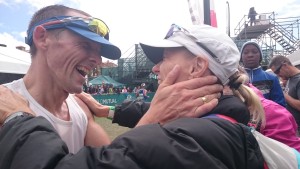 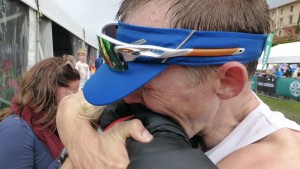 My time of 5h 21min is not great, but if I subtract at least 12-15 min for the toilet break and another shorter toilet break earlier in the race, the running time itself was in the 5h 6min range. Which would have been my second best Two Oceans.

It’s not about the time. It’s about the quality of life you gain through running.

After finishing I drank a home made special recovery drink, made with bananas, berries, salt, dates and some protein. It was very good, because solid food would not have been the best choice for my tummy.

My learning out of this experience: If you have tummy issues the days leading to the race, do not wait until after the race to take some Imodium 🙂

As you can see, my race was very consistent until I had to find a toilet, which also made me walk a few times. The small numbers in the bottom of the graph are not the km markers but the manual laps I stopped with my watch.