Early morning – running is not for sissies

The Red Hill Marathon is not only a very scenic and beautiful marathon, it’s also a perfect preparation for the Two Oceans Ultra as well as for Comrades.

The profile is similar to Oceans, maybe even a bit more difficult with the long uphill section which I find harder to run than Oceans’ Chapmans Peak. But that’s just my impression.

Anyway, it was a stunning morning with a full moon just above the sea when we went to the start. Before walking there I collected my race number and while I put it onto my running vest, a guy approached me and told me “I’m a huge fan of your blog”. Wow – I was blown away, that I was recognized and that there are fans of my blog. So, dear friend, thank you very much – this is a great motivation for me to carry on writing this blog, which is quite a lonely tasks and I never know if anyone really cares about what I am writing.

My plan was to take it as a long training run for Two Oceans and Comrades while not taking it too easy, aiming for a 5:15 min/km pace – which is just about the pace to finish Two Oceans Ultra in under 5 hours – my goal for 2016. To get the pace right I monitor my stride rate which has to be in the 167 – 171 strides/min range for that pace.

I felt great at the start and was able to run a solid pace in the 5:05 min/km range. That’s good and necessary to have some time in the bank for the hills to come. 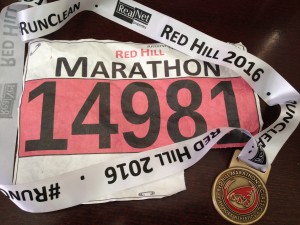 The race was run under the theme #RunClean, an initiative to encourage runners not to throw away their trash and especially the empty water sachets wherever they want, but only into the bins provided. One should think “why do you have to encourage that, shouldn’t that be normal?”. Yes, you are right, but for some runners it seems to be an exhausting challenge to carry a 2g heavy empty water sachet with them until they reach the next bin – in case they missed the bins at the water table where they took the sachet.

My subjective experience was to see less trash on the route, but still there were empty sachets every now and then. So I started collecting some of them, carrying them with me to the next bin. It costs you maybe 1 second to slow down and pick up a sachet, but it’s simply a matter of respect – for mother nature, for other runners and for non-runners.

I was very happy when I noticed other runners doing the same: picking up the trash of others. That’s the way to go.

There was one moment where we had just passed a water table and I heard an empty paper cup been thrown onto the road. I turned around and asked the guy why he was doing it. He replied “because I missed the last bin and there is no bin any more”. What an explanation. My next question, I got a bit angry, was “Is it too hard to carry it with you instead of throwing it onto the road?” He replied “I did not know that we should not throw into the nature.” What can you say.

Well, I carried on running and I really hope this guy got the message and refrained from throwing his waste into the nature from that moment on.

Back to my race. Going up Red Hill I felt really strong, so I did not have to walk a single step. Luckily it was not as hot as in some of the previous years (it was my 5th Red Hill).

After getting the the top of Red Hill I always celebrate the moment, because from there on it’s almost completely flat or downhill. Not like the last 20 km of a Comrades (down), where you think it’s downhill all the time, but it’s not. 🙂 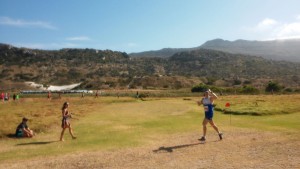 During the last 10 km I noticed that I could beat my PB from 2015 (3h 44min) and started paying more attention to my pace. I really wanted to break that PB and accelerated again for the last few km to finish in 3h 42 min.

I’m pretty happy with that result, giving me more confidence for Oceans and Comrades. I’m also pleased about my performance since I did not reduce my training intensity. On the Saturday before todays race I did a 37 km long slow run and a 81 km training week.

My nutrition was my usual combination of pizza and energy bars: 6 small packs of pizza (leftover from the pre-race pizza dinner) and 1 race bar.

I’m very pleased with my average heart rate of 161 bpm and a stride rate/cadence of 168 strides/minute.

You can check all my running data for the 2016 Red Hill Marathon, recorded with my Garmin Fenix 3 here:

My watch has a fancy feature called “race predictor”. I don’t know how it works, but if I look at it I am wondering what my watch is trying to tell me? Does it say “come on, run harder” or anything like that? I don’t know… 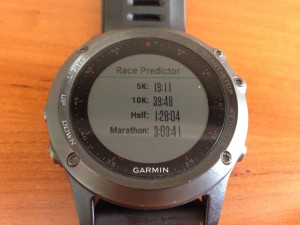