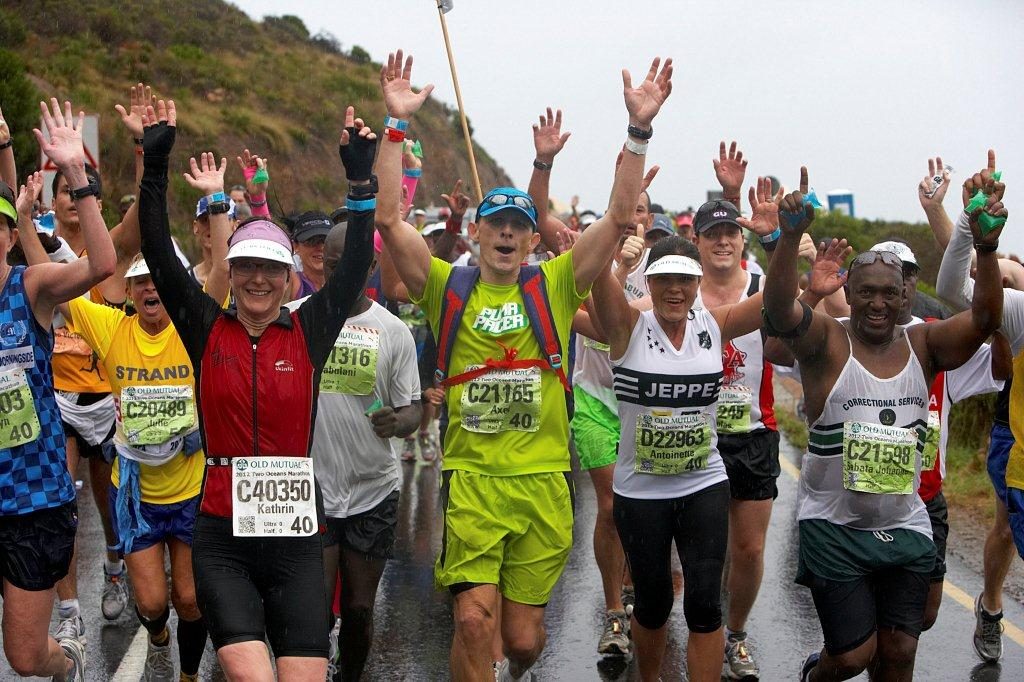 It’s 7th April 2012 and it’s my birthday. But this year’s birthday is different, starting with the alarm clock ringing at 3.30am. Well, I didn’t need the alarm, since I was already awake since 2.30 am. This is very common for me on race day…

The first look went outside: The weather forecast predicted light rain from 8.00 am and heavy rain from 11.00am, but you never know. Looking outside was promising – just a few clouds.

“Maybe I’m lucky” I was guessing. It was good that I did not know what was prepared for us…

My birthday gift is taking part at the Old Mutual Two Oceans Ultra Marathon (56 km) in Cape Town for the 4th time. The best about it: I’m not running for myself – I’m running as a PUMA Pacer pacemaker for runners, who are dreaming about finishing in less than 6 hours.

When you finish your Two Oceans Marathon, you receive a medal. What kind of medal depends on the time you needed for your run. Finishing in 5-6 hours qualifies you for a “Bronze Medal”, 6-7 hours a “Blue Medal”. 7 hours, 00 minutes and 01 seconds qualifies you for: nothing. No medal, no timing, no official result. Many races in South Africa have a “cut off” time and I’m positive about this system.

After the alarm went off, I had my standard marathon breakfast (1 coffee, 3 slices of toast); packed my race food into the bags of my running shorts and off we went. The banana is not for the race: I always eat one in the start area, some 30 minutes before the gun. 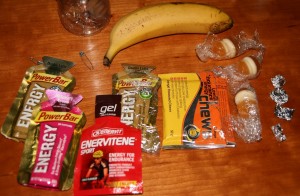 To make it easy for other runners to see me as their PUMA pacemaker, I had 1.8 m long wooden stick with a “6:00” flag on top. This shows all runners, that my pace is calculated for a finish in less than 6 hours.It would have been painful to hold such a stick in my hands for 6 hours. With the help of my wife Silke I modified the rucksack PUMA provided me. It was very solid and that was good, because I needed it solid for the weather conditions we did not know about as of yet…To motivate my fellow runners, I added a note as well – and it made them sing “Happy Birthday” multiple times… Very, very nice! 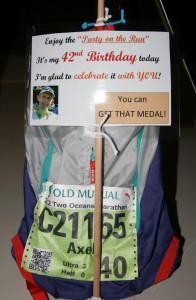 It took me 3 or 4 hours on Friday to calculate and plan, how to pace the race in the best way. How I did it will be explained in another blog post. You can see the result on my pacing charts. Every runner might know how hard it is to calculate while you’re on the run. The further I run, the worse my math gets 😉 so I had 3 charts in case I might lose one or two of them. 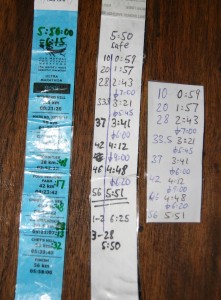 Click on the picture to see the sub 6h pacing chart

After a short ride with a motor scooter my wife and I were able to move through the traffic easily and find parking close to the starting area. With almost 25,000 runners (expected), thereof 16,000 half marathon and 9,000 ultra marathon runners a lot of traffic had to be expected.

It all went smooth and we immediately met 3 of our friends who were also heading for the half marathon start, which was the race my wife participated as well. When they went to their starting area, I had the opportunity to watch all these excited runners. Amazing!

30 Minutes before the start

Some 30 Minutes before the Ultra start, I went into the seeding batch “C”, where I met my second “bus driver” for the sub 6h bus. In South Africa the pacemakers are called “bus driver” and the group is called “bus” – even if we are running all the time 😉

The second busdriver was very excited, because a sub 6 was a challenge for him as well (and he made it!). I was quite relaxed, since my personal best from 2011 is a 4h 54 min which is almost 1 hour faster than the time I was supposed to run today. I was scheduled as the first bus aiming for a 5h 50min finish.

More and more runners arrived at block C and joined me. One of them was Kathrin from Germany, who I met at the Expo, and she was keen on running in my bus as well. It was her first time and so she was very excite.

As mentioned earlier, the forecast predicted light rain from 8.00 am and strong rain from 11.00. Right now it was dry, yet…

The folks from the weather service had a bad day today, because they were completely wrong.

After some 30 minutes, at around 7.00 am, it started drizzling, then it was raining and eventually it was heavily raining without any breaks. In addition to that the wind was blowing which was especially tough for the mind. It was also tough for the body, because with soaked shirts, pants and shoes you can even start freezing while you’re running…

As PUMA Pacer I was not only responsible to be on time, but also to keep up the motivation of the group.

Therefore we were talking and singing from time to time. I also taught my group some German, a “motivational song” which is not really a song, and it goes like this:

It doesn’t make any sense and has no meaning at all. It’s just for fun.

It went very well, but over the course of the race, the “Heu Heu Heu” changed to a “Huu Huu Huu” – maybe a result of the cold weather 😉

Anyway it was fun, and that’s the key point.

Right from the start I had three very consistent running girls around me named Kathrin, Julie and Anesca – reliable like the best wingman in the world. They mentioned in the beginning, that they’d try to stick with me as long as possible but they were not sure if they could really finish in sub 6.

Achieving Personal Bests – even in this rain…

But they were amazing. They even avoided the usual stop for a loo during the race, because they did not want to lose track of my group. I’m very proud of them and all three of them made it in less than 6 hours – Kathrin for the first time ever, Anesca & Julie in their Personal Best. Congratulations to all of them and of course to all of the other members of my bus who I don’t know by name.

Every 15 – 20 minutes I made an announcement regarding our bus schedule. We were on time all of the time! In the beginning we had to make up 3 minutes to get on schedule, because it took us 1 minute from the gun to passing the “Start” sign and we also ran pretty slowly for the first 2 km to warm up.

Did I mention the rain? It was heavy and I never experience such weather conditions at any other race in South Africa so far. But you know, if you make it and finish such a race, you can say “I made it”. And that’s worth every minute fighting with rain and wind!

Because pain is temporary, glory is eternal!

Since the Two Oceans is anything but flat we needed to get a bit ahead to be able to tackle the two mountains in style. Especially Constantia Nek was my major concern and I wanted to give my group the possibility to walk up the Nek without pressure.

For the first real uphill section to Chapman’s Peak (km 29 – 33.5) we were able to run a modest pace without killing ourselves. After reaching the summit I reminded the runners every few 100 m NOT to push on the 4 km long downhill section. Because there were still 20 km to go and the worst climb was yet to come. Most of my group members followed this advice.

After this section I was preparing everyone for Constantia Nek. And I tried to make it very seductive – by announcing a very long uphill walk instead of a run up to Constantia Nek. They were all amazed and kept going, waiting for the walking section.

Folks, you were great!

These boots are made for walking…

After reaching the marathon mark at 42.2 km we did a first walk for a few minutes on the first uphill section. Then it went downhill and we started running again, very slowly. I seduced the group with the second walking section, telling them that we are just about to reach a point where we will start walking for the next 20 minutes. This kept them going.

Eventually we reached km 44 and the walking section started until we reached km 46 and the summit of Constantia Nek after climbing for 2km with up to 10%.

I reminded the group that we are perfectly on schedule whenever anyone started running uphill. We were all safe and did walk at a 10 min/km pace until we reached the Nek. On top of the Nek we had 10 km to go on an undulating downhill route. This was 4h and 48 min into the race.

This last section can be quite tricky, especially in the heat if you are already worn out and you are running downhill too fast. This can kill your legs and destroy a good finish.

Well, the heat wasn’t a problem at all, since it was still raining cats and dogs. But I kept reminding my group about our perfect schedule and not to push when running downhill.

At km 53 we hit the last tricky part – the last some 300m long uphill section just before heading towards the finish. The group got another reward, because we were able to walk up this hill as well, and I heard several “Thank you” for this well deserved last break.

As an additional reward the sun came out for 30 seconds…

…just to be replaced by another even more severe rain shower which did not stop until we finished. But after 5 hours in the pouring rain, this doesn’t matter anymore.

The result: We finished in 5 hours 51 minutes on a completely soaked grass field at the University of Cape Town – a “war of mud” as one of the newspapers titled it on the next day. Anesca, Kathrin and Julie also arrived in time and got their bronze medal! 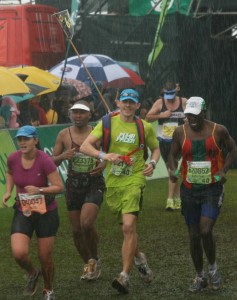 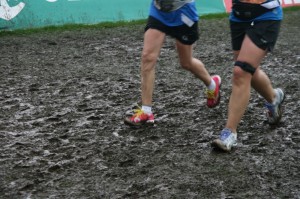 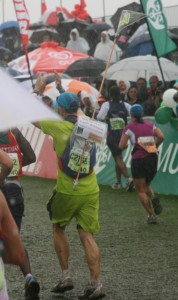 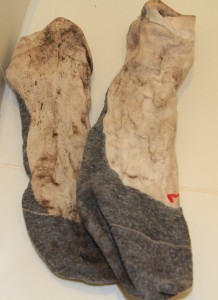 Several of my “bus passengers” said good bye and thank you, and they were very happy getting their bronze medal and even a new personal best despite the severe weather conditions.

I was very lucky having the opportunity to get out of the rain and into the “International Tent” where my wife was waiting for me with a towel and dry clothes. 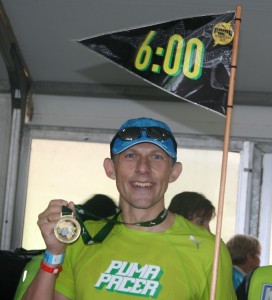 It’s been an outstanding experience to celebrate my birthday, run my 4th Two Oceans Ultra and be a PUMA Pacer all at once! It’s fantastic to be able to give back to other people, especially on a birthday…

Steffi @OMTOM: Thank you very much for making this happen! 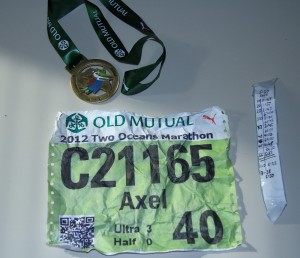 Special thanks to all supporters at the water tables, the marshals on the road, the police and traffic service and all spectators for supporting us no matter what weather! Do I have to mention that the South Africans where having a braai (BBQ) in the morning despite the pouring rain 😉 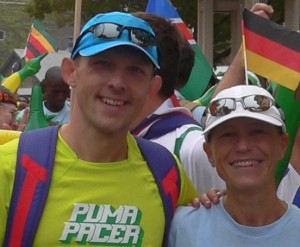 …and an extraordinary “Thank you” to my wife Silke, since she is very supportive, even if I am out for very long runs and we can’t see each other, especially on the weekends.

Dear Silke: I’m glad and I feel blessed to have you on my side and I’m so happy that you support me and share my passion for running.