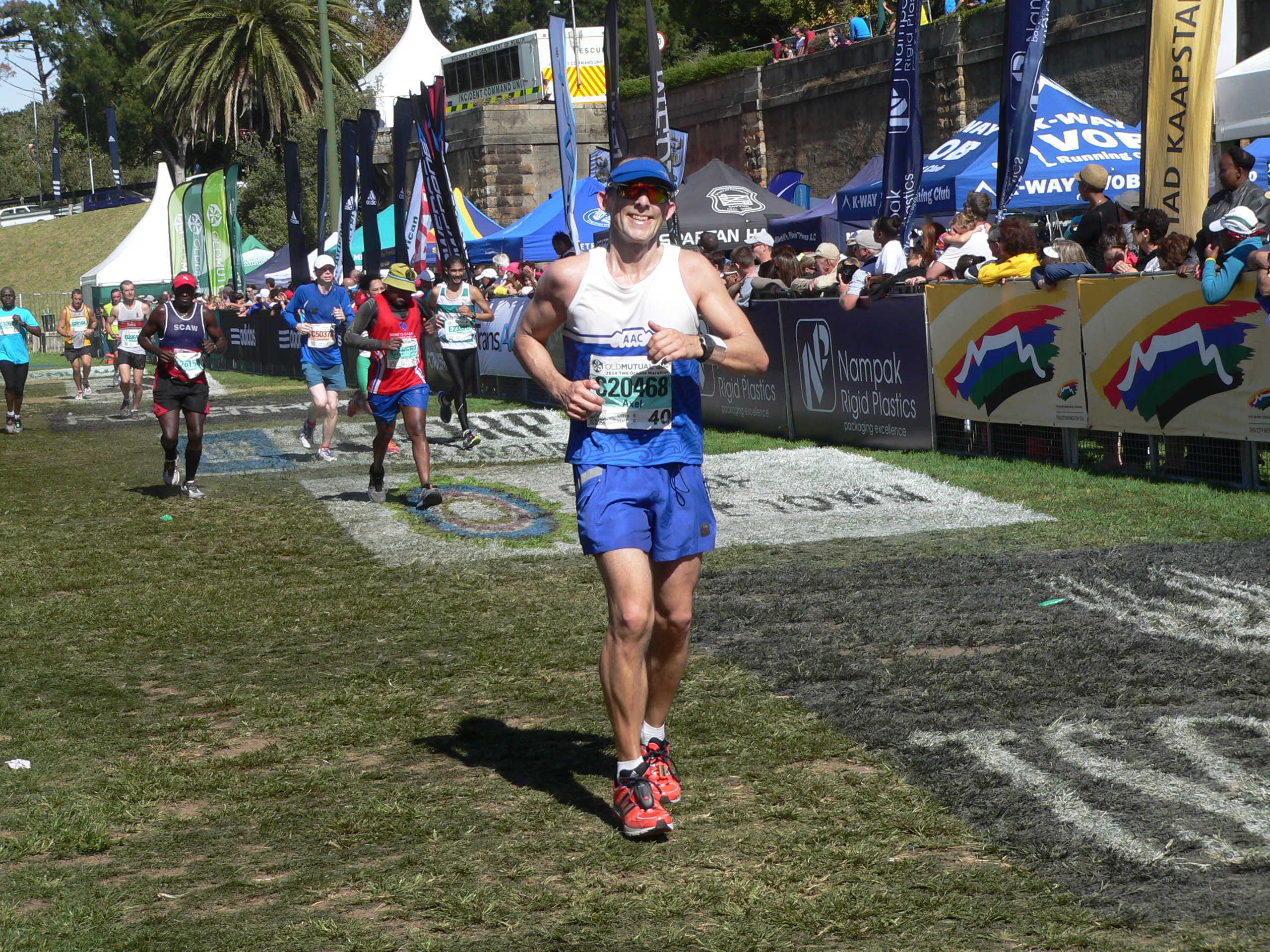 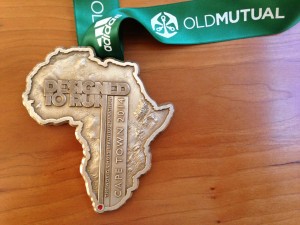 The morning looked promising. 17°C and a slight breeze at 3:30 am when the alarm clock woke my wife and I up.

I slept surprisingly well, although not really long 🙂

Unlike in the past, when the evening before a big race was a traditional “carbo loading” evening with pasta, I changed my eating habits. I’m now into Pizza and this seems to be working even better. It’s easier to digest and maybe the reason for a better sleep.

Anyway, after a short breakfast we headed to the start. At 5 am we arrived there (our Vespa Scooter comes in handy to get through the traffic jam of 27,000 runners).

My wife’s was scheduled to start her 5th Two Oceans half marathon at 6 am, the Ultra started at 6.30.

After saying goodbye she went into her starting area and I went into mine. Since I entered my start block C early, I could walk straight up to the front.

Therefore I was about 50 m behind the starting line. Very good for 2 reasons: You avoid having to overtake too many runners ahead of you and you don’t waste valuable time – since in South Africa there is no “NET”-time. Every race is run “from gun to mat” which means, the time starts when the gun goes off, no matter if you cross the starting line 2 seconds or 5 minutes later (which can happen if you start from the back). And the time ends when you cross the time keeping mat at the finish.

Anyway, I sat down, pulled my garbage bag around my body real tight to keep warm, since the wind was blowing. The good thing: It was not hot in the morning 🙂

The weather turned out to be pretty ok, at least if you finished not too late.

I felt good in the morning and had one clear strategy:

Due to my injury and the 3 weeks of little to no training it was a risk. I knew, that this could mean I might run too fast in the beginning and pay for it later. As you know me, I had prepared a wristband with the split times for a Sub 5h finish. 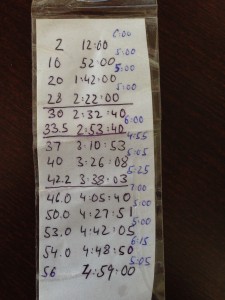 What was my alternative? To play safe, start slower and know for certain that I would finish in 5h+.

Even if yesterday’s “running test” at the International Friendship Run after my 3 week break was good, I was wondering if my injury would return during this 56 km run. Not only because of the length but also the much higher race pace compared to the Friendship Run.

The first 2.5 km are flat / with a slight incline so the pace was not too high. After that, I managed to run a decent and constant sub 5:00 min/km pace. I felt great, strong, good.

After some 18 km my left leg/shin made itself feel a bit. Just a bit, and this disappeared in no time. So, I was not concerned.

Blog Readers on the Run

At km 26 I had quite an amazing experience.

Writing a blog often feels like a one way street. I enjoy writing my posts and I know some readers personally. I can see the popularity of my posts based on the blog statistics, but a statistic is not very personal.

If people tell me, that they get inspired by my posts, that they apply some of my training techniques or ideas I always feel, that investing my time in this blog makes sense.

Ok, back to the race.

At a water table after km 26 I was ahead of two runners, male and female. Their bib said “Ultra 0” which means, they ran their first ultra.

When I got ahead of these two to grab a water sachet from the table, the lady said “Hey, there is Axel”, and both of them said “Hi Axel”.

You can imagine how surprised I was. Actually, it’s not unusual to hear your name when supporters call it to encourage you. Since the name is printed on the bib. But this was different.

I turned around, said “Hi” and did not recognize any familiar faces. While I was still wondering why they called me, he said “We are running according to your splits for a Sub 5h finish. I printed your times and splits, do you wanna see?”

You can imagine that I was kind of overwhelmed. So we ran along for about 2 km or so and chatted. They said, that they enjoyed reading my posts and recommendations, and that this split chart was the best one they found to tackle their first ultra.

They asked me if I would pace them from now on, but I suggested to them to go on their own pace and follow my splits. At the first uphill section of Chapman’s Peak Drive I took a short walking break and they carried on.

After the race I found out that Mitsie, the female runner, finished in a sensational 4h 48 min and was amongst the first 100 female runners! Respect Mitsie! And Hennie finished a few seconds later. Well done to you both!

The first 28 km are flat, and the second half will always be slower due to the two hills Chapman’s Peak and Constantia Nek. 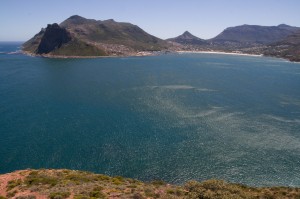 As mentioned at the beginning of Chappie’s I took a short walking break and felt, that the day might become tough. On my way up to Chapman’s Peak and on top at km 33.5 I was slower than planned, and lost already about 4 minutes of my credit from the first half.

The way downhill was becoming hard and that’s when I felt, that a Sub 5 might be unrealistic. Usually it should have been doable to run faster downhill, without going to fast. But I felt that I might need to walk. Downhill. Very bad sign.

I did not walk downhill, but I was too slow.

Meeting a legend and Mrs. Turbo

I was fighting my way downhill, when 2 clubmaits, the Two Oceans icon Mark Wagenheim (on his 36th race, yes – no typo: 36) and Terry “Turbo” Deats from my running club caught up with me.

Terry looked fresh as always and said “don’t worry for a sub 5, last year I have been at this point at the same time and managed to finish sub 5. Well, I had very strong last 14 km”. (Terry managed to finish again sub 5 and was amongst the top 100 ladies, congrats!)

I could not follow their pace and slowed down to take another salt tablet. The reason: After about 30 km my left shin started hurting more or less continuously. It wasn’t too bad but it was not normal either. I believe I adjusted my running style (unconsciously) and this caused the cramps in my right tight. And those cramps persisted for the remainder of the race. Even taking in salt for 3 times did not help.

The marathon mark was crossed in 3h 43 min, 6 min slower than in 2011 where I finished in 4h 54 min. I would have needed a very strong finish to get back on track. which was not doable today.

So I made the call and decided to slow down and pay attention to my tight and shin. For me it did not make any difference if I would finish in 5h 5 minutes or 5h 15 minutes.

From km 44 – 46 the brutal Constantia Nek is on the menu and I decided to walk up the full distance. This costed me about 6 minutes compared to running it slowly or run/walk this section (walking uphill 8:30 – 9:30 min/km, running uphill would be 6 min/km). I’ll write about this in my “aftermath” post soon.

Let me be honest: While I was fighting my way up Constantia Nek I was questioning myself.

Not regarding running Oceans, but regarding the hours and hours, the km and km I ran in preparation for this race. Almost 1000 km in the first 3 months of 2014 alone, several 40+km runs, and for what?

It is tough. You invest so much time, energy, dedication and in the end it doesn’t pay off.

I was frustrated. I thought, that in the future I might not go for specific times any more and rather just run the race or be an official pace setter.

In my profession as an executive coach I’m pretty used to those mental games and situations (my clients go through). So I knew, that this is just what happens when you are in a frustrating situation – and this will change when you have left the situation.

The positive thought I had was gratitude regarding the fact, that I was able to run this race at all. Not only because of the injury I had but also in general. It’s still a privilege being able to run the most beautiful marathon in the world and finish it in the top quarter of the field. 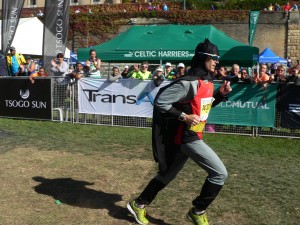 One of the faster runners. No surprise with superpowers

This year the weather was pretty ok for me. It could have been colder, but luckily we had almost no wind at all. The temperature went from maybe 17°C at the start up to the low 20°C. Since I ran the Peninsula Marathon in February in 27°C from the start on, I kind of got used to hotter conditions 🙂

But I know that many runners were suffering from the heat. After the race the officials announced that there were much more runners finishing in the 6-7 hours timeframe than expected.

You should know that you receive different medals based on your time! Every hour another medal. After 7 hours and 1 second you get nothing. 7 hours is the cut off. Finishing later means, that officially you did not finish.

After crossing Constantia Nek, the last 10 km can be tricky. The road is mainly downhill and the bending of the road is brutal. Sometimes it feels like one food is 10 cm shorter than the other one.

I tried for the last time to increase my speed again. It worked to a certain extend, but far away from my 2011 times, where I managed to run 5:00 min/km and faster on many sections of the last 10 km.

The final 3 km include one uphill section you would not really pay attention to at a normal run, but after 53 km race pace you feel it. I walked a bit until I made my way into the stadium.

I knew my wife would be waiting for me at the International Tent and I decided not to run straight to the finish but rather stop, give her a kiss and finish a bit later. 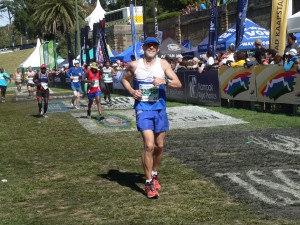 My wife is the most important supporter of mine, not only in running, and I am very grateful for that. Silke, I love you! Thank you for everything you do for me, for letting me run for 4-5 hours every Saturday, accept my laziness after those runs, travel with me to races, …

Due to the cramps in my right tight, I was not able to unlace my shoes. Thanks for that again to my lovely wife.

After some 15 – 20 min I started feeling better and we were all waiting for Martin and Andrew – and they came in as well. Tired and happy.

I recognize, this post is very long already. I’ll write have another post regarding the aftermath and regarding my leg injury.

Let me finish this post saying once again: the Old Mutual Two Oceans Marathon is the worlds most beautiful marathon and I can’t wait to run it again next year!

This means, I finished in the top 20% group, which is usually my goal and what makes me happy. 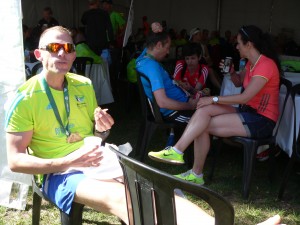 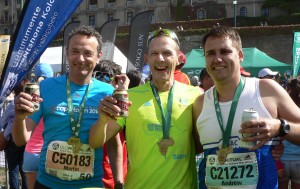 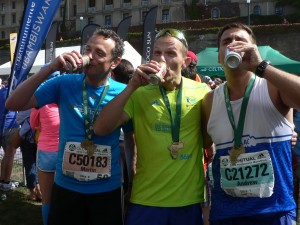 The story after the race: