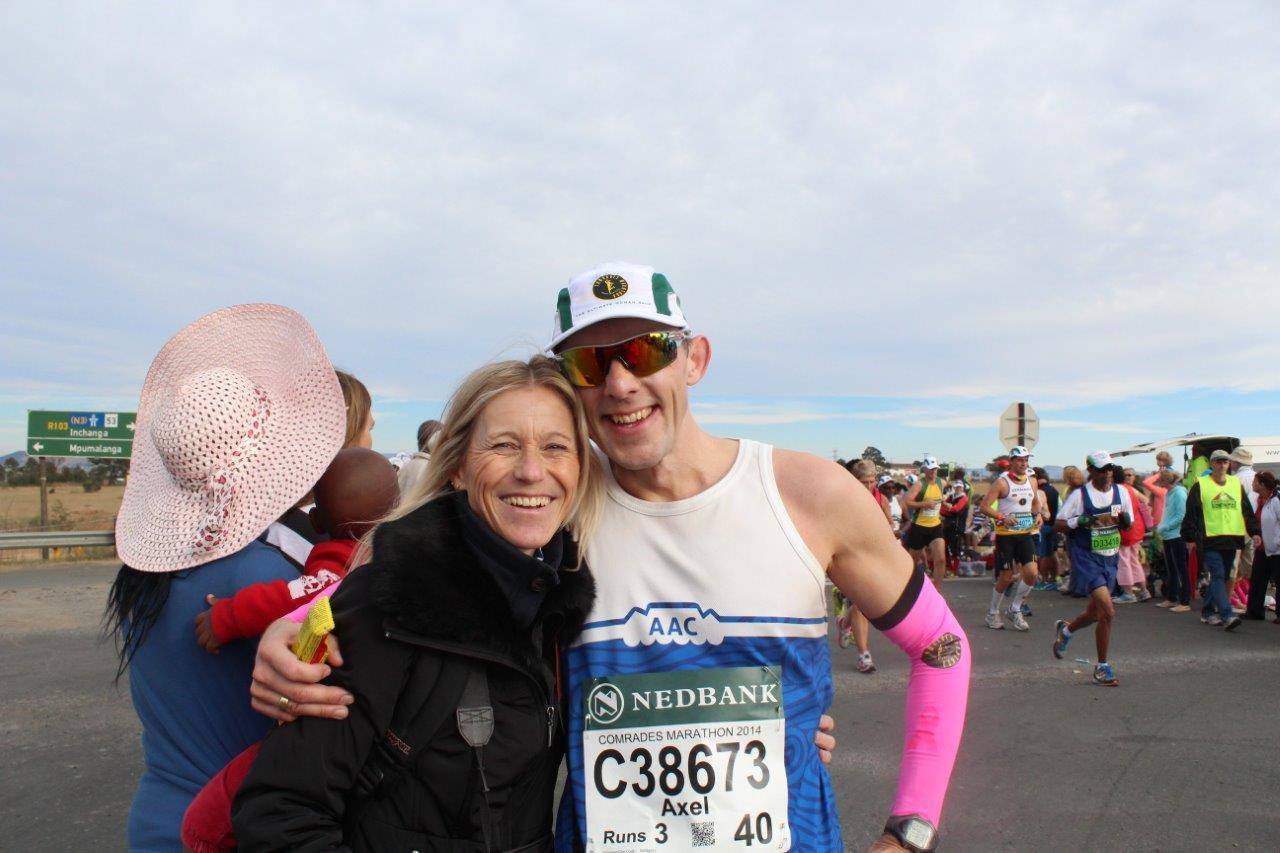 It was my 4th Comrades.  And it was my toughest …

In the morning, I woke up 1 minute before the 3:00 am alarm went off, everything looked really good. I felt good, and confident. 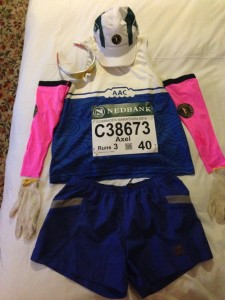 my race outfit in the morning 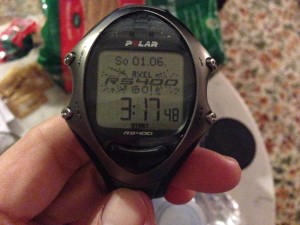 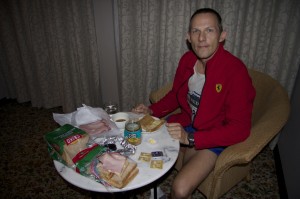 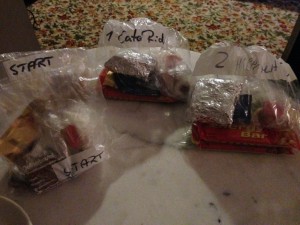 the food packs for the race

This year’s Comrades ultra-marathon was a so called “Down Run” from Pietermaritzburg to Durban, 89.2 km in distance. ”Down“ might sound tempting, but it would lead you the wrong way. The route makes you climb 1200 m in altitude and drops 1800 m in total. So it’s not just like down the hill …

The weather was kind to us. During the first half…

It was not too cold (about 12 ° C) at the start and for the first few hours it was mostly cloudy. The first hour of the race, which starts at 5.30 in the morning for the 14,620 runners, you ran in the dark before sunrise.

When the sun came out, it was spectacular! Red burning clouds across the horizon.

The following picture shows my wife and our friend Julia. Both are at their first “support station”, 30 km after the start, in front of the spectacular sun rise. 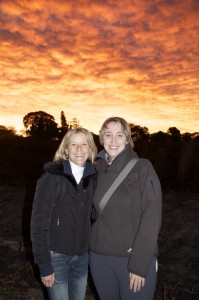 The first 30 km went really well for me.

A basic challenge of Comrades is it’s length. (Not a surprise  🙂 ).

In the beginning you are fresh and have to be extremely cautious. Every minute you run too fast during the first half, you pay for 10x during the second. That’s a mistake I did not want to make.

In addition to that, my last 7 weeks before the race were far from perfect.

I was injured before the Two Oceans Ultra Marathon (56 km on 19.04.14), had an MRI afterwards and another 2 week running break. Fortunately, the first three months of the year went extremely well. Between 1st of January 2014 and the start of Comrades I ran 1200 km.

Therefore I was more than grateful that I was at the starting line, fealing healthy and pain free!

After 30 km or 3 hours and 10 minutes into the race, I met my wife and took on a new supply of food. Gels, energy bars, etc.

I had planned to eat 40 – 60 g of carbohydrates per hour. This did work very well during the first third, I was still trying during the second and I did not manage this in the last third of the race. I’ll write another post about my nutrition – the plan and the reality – in the next few days. 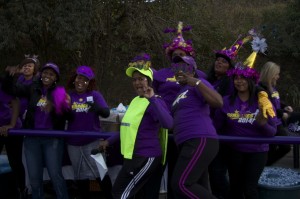 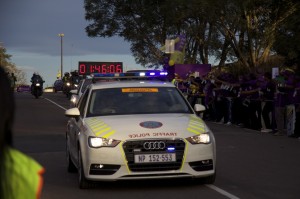 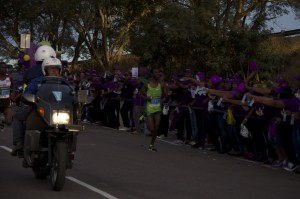 one of the front runners 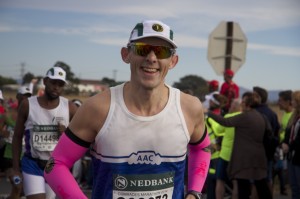 Looking forward to meet my wife

I trust I need to explain my „pretty in pink“ appearance for all my friends from outside South Africa.

This year I ran for the charity organization “Pink Drive”. This organisation is a breast cancer awareness charity, doing incredible great things. They have a mammography unit and an educational unit on a truck, which they drive around South Africa. They especially go places, where medical education and medical services are not really available.

Many, many thanks to all all my supporters and donors!

In South Africa, this organization is very well known. If a man is wearing pink, showing the support for Pink Drive, it makes the supporters chear you on even more 🙂

Running for more than myself, and run for this organisation did really help me, when the going got tough, later in the race.

Before the race I created my running mantra for Comrades. It was:

“Someone in a cancer therapy has no option quit. So don’t I.”

This was enormously helpful for me. 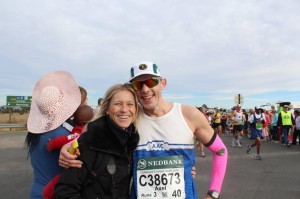 It is common that running for such a long time comes with a phase of a mental low. When I faced the toughest time I ever experienced during a race, this mantra got me going. My mental low held on for more than 15 km, approx. 1.75 hours. I’ll talk about this later …

The pink sleeves were handy as cooling devices as well: At the water stations you get the water in sachets. You bite a hole into the sachet and drink it or pour it over your head, legs, whatever… During the hot period I took 2 sachets, bit a little hole in each and stuffed one sachet each into a sleve. The water slowly ran into the sleeves and cooled them (and me) down. Really nice.

And then I pulled them up again. Because all of a sudden lots of spectators where waiting for us runners with crushed ice. Often the little kids were standing on the road with their bags of ice cubes. I made them happy (I trust) by stopping and letting them put a few ice cube into my sleeves. That was really refreshing. 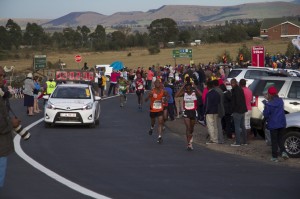 The first two females are getting close (in the background) 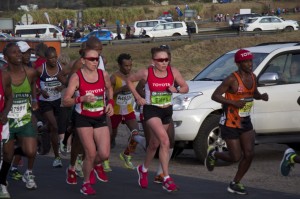 The two ladies in red on the photo above are Olesya & Elena Nurgalieva. The Russian twins dominate ultra running for a decade already, with (combined) 12x Comrades victories between 2003 to 2013 and 7x Two Oceans wins 2004-2012., This year they came in 2nd and 3rd.  People already say their star might be going down. I say: Being second and third is remarkable! 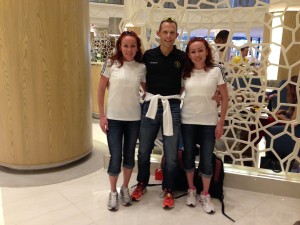 Look at following picture and the red sign, saying “59 km”. 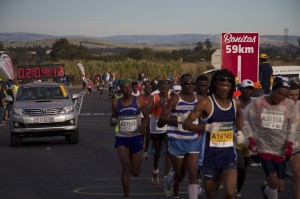 As at any official race, you find km markers every km.

Therefore the first sign you get to see says “89 km”. Not really encouraging …

It is extremely important to ignore the km marker.

What you should do is to mentally register that you covered another km. You can also take the „lap-time“ on your watch. But do not look at them consciously. It would drive you crazy! Imagine you covered 40 km already, are tired and it’s getting hot, and the sign tells you „another 49 km to go“.

Anyway, the short stop and meeting my wife is always a highlight during the run and a good point to look forward to as well. We waved good bye and off I went for the next part.

I continued to be modest with my pace. After about 35 km I met a very strong (and about 10 years younger) runner of my club, who so far was way ahead of me. He had to reduce his pace, because he was sick 2 weeks earlier, and probably this kicked in now. He still managed to finish in a decent time, but he usually would have made it in less than 9 hours. You absolutely never know what can happen during a Comrades.

The half-time, or more precisely, “half way” mark was reached after 4 hours and 44 minutes. For my dream time of less than nine hours I was already slow, but with an optimal second half a “Sub 9” would still have been possible. 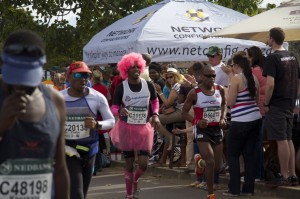 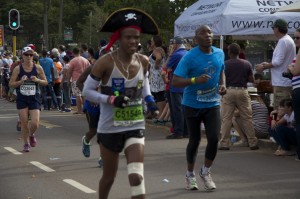 A pirate without a ship 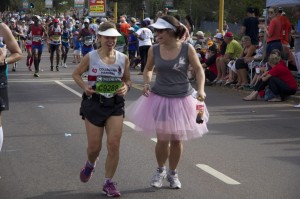 After about 5 hours and still a cloudy sky, the weather became an additional challenge. It got really warm and especially humid. Now (after the race) I just read that the humidity went up to almost 75%. The temperature must have been in the high 20°C (28 – 30°C maybe).

At km 56 (33 to go) I met my wife again. I probably (still) looked quite fit, because the surrounding spectators said about me “he does not even sweat”.   They should have seen me 3 km later. 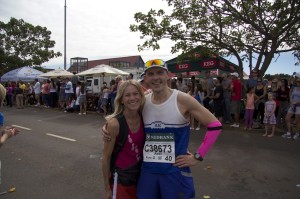 You can tell from the top my wife is wearing: It was warm!

At the “31 km to go” mark my time of suffering began.  Look at the following data of my Polar RS400 watch. The thick blue line shows my actual running speed, recorded every 5 seconds.

The higher the line, the faster I was. A line close to the bottom means I was walking slowly

NEVER in my life I was forced to make that many walking breaks as during this run. Within every single km!

You have to imagine one thing: I usually run a marathon in 3hours 45 minutes. And now I was not capable of running a single km without a break!

And let’s add a little detail: It happend when the route was mainly downhill. I could not run downhill but had to walk …

This is a mental horror show!

For a while I used the “lamp post tactics”. What’s that?

You pick at a specific lamp post on the road and tell yourself: “ok I am going to run until I reach this lamppost. From then on I walk until I reach the next (or second next) lamp post. And I’ll start running again.“

Initially it worked. After a while I had only one tactic: Keep moving.

Luckily I was not suffering any pain or cramps. I was just so exhausted that I just could not run continuously.

At 9 km to go I felt like my spirit had returned.

During the tough period my wife and I exchanged text messages. I wanted to let her know, when she could expect me at the finish. But for a long time, it was not possible to calculate the finish time.

I remember that I was at about 24 km to go and I was thinking „ok, if I am walking with 8 min/km, how long will I need to get to the finish.“ I divided 24 by 8, which was 3 (correct) and then I thought „and was does 3 mean?“. It’s so funny how running for too long effects the capability of calculation 🙂 At least I know, I am not the only runner with this issue.

With 9 km to go I regained hope to finish in less than 10 hours. That was my minimum goal.

Eventually the stadium came into sight and I was relieved as never before! 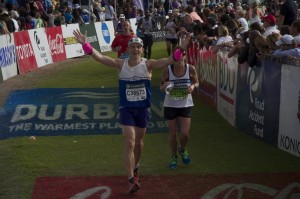 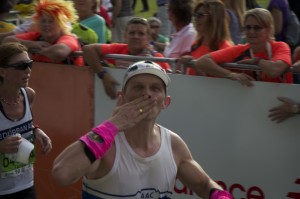 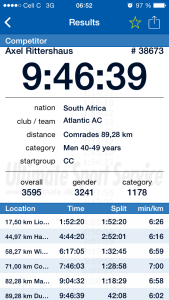 But how important is the time?  Thinking of the injuries before and after the Two Oceans I am glad that I could run and finish. Pain-free! Withouth health issues.

The “Pink Drive” had a suite at the rugby stadium And they had beer! The best drink after such a run! This was topped with a foot and shoulder massage.That was awesome! 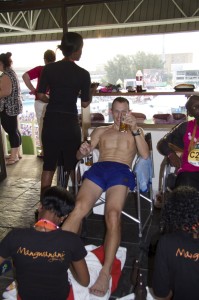 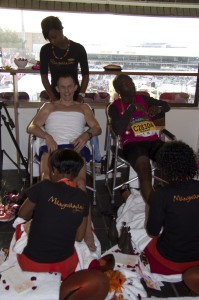 We waited until the dramatic and tragic end of the Comrades, the 12 hours cut off time.

Everyone who arrives 1 second after the cut off gun is fired, did officially not finish!

The stadium is going crazy during the final minutes to encourage as many runners and help them to cross the finish line.It is very moving to stand there and to know that these runners have started just like yourself at 5:30 in the morning. And they miss their medal and officiall finish because of a few seconds or minutes. 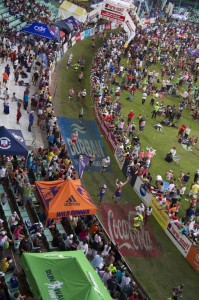 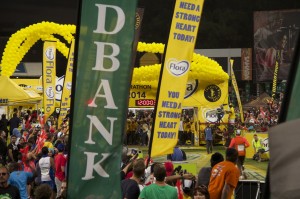 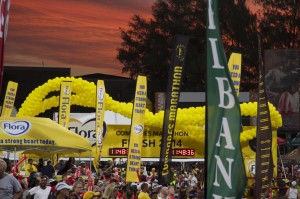 In the following chart you can see how my position changed over the course of the day. I can’t remember having passed that many runners:)
It felt more like the opposite.

Back at the hotel there was a nice surprise: The Hilton Hotel Durban has learned from the previous Comrades’ – in front of the elevators they waited for us with a big ice box.  No, not vanilla or chocolate ice cream. Ice cubes for an ice bath, of course! 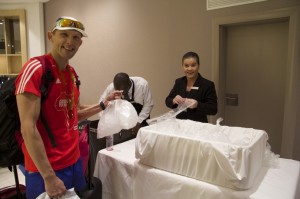 After a long hot shower I’ve actually spent about 10 minutes doing my ice bath for the legs. That’s cold, but good 🙂

Eventually we enjoyed a nice dinner with plenty of good food, beer and dessert. 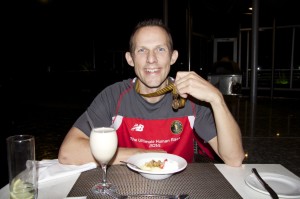 I sincerely thank all donors for Pink Drive, all friends and family, for the encouraging words and thoughts before the race.

Above all, I thank my wife for her support during the race, and even more so during the many months before the race. Silke, I love you.