I don’t exactly why, but a while ago I entered the 100 km UltraTrail Cape Town, a trail race which is already iconic, even if it’s only 3 years old. And it’s a tough one, 4200 m elevation gain and a cut off time of 17 hours.

The only serious trail race I ever did before was the 2014 Three Peaks Challenge ( 50 km, 3000 m elevation gain). But I never ran more than 89 km (Comrades) neither on road nor on trail.

Luckily the organisers offer 8 recce runs to learn more about the route, an amazing opportunity.

I did the first recce on August 13th, covering the first couple of km of the run with already about 1000 m of elevation gain. There are always two groups, the fast group and the second. At that time I wasn’t in great shape and hadn’t done too much of trail running, but I tried my best to stick to the fast group. Boy did I have to fight to keep in touch with them.

And if you are not as fast as the front runners, you almost never have time to recover. Because they wait for you and (almost) at the very moment the last runner is back in the group, the group starts again 😉

I managed to stay in the group, but most of the time I was fighting hard. The most challenging part was not only to keep up with them on the uphill, the biggest challenge is their speed of running downhill. It’s very much an experience and trust thing – and I wasn’t that good…

Anyhow, I survived – and the next day I had sore legs like never ever before. Not even after Comrades… And I asked myself if I really know what I got myself into.

The weeks went by, I did more long runs and several longer (3h) trail sessions on my own. It was time for the masterpiece, the 35 km and 2000 m elevation gain recce, going up Table Mountain, down again, and up the gruelling final stretch to the Blockhouse. 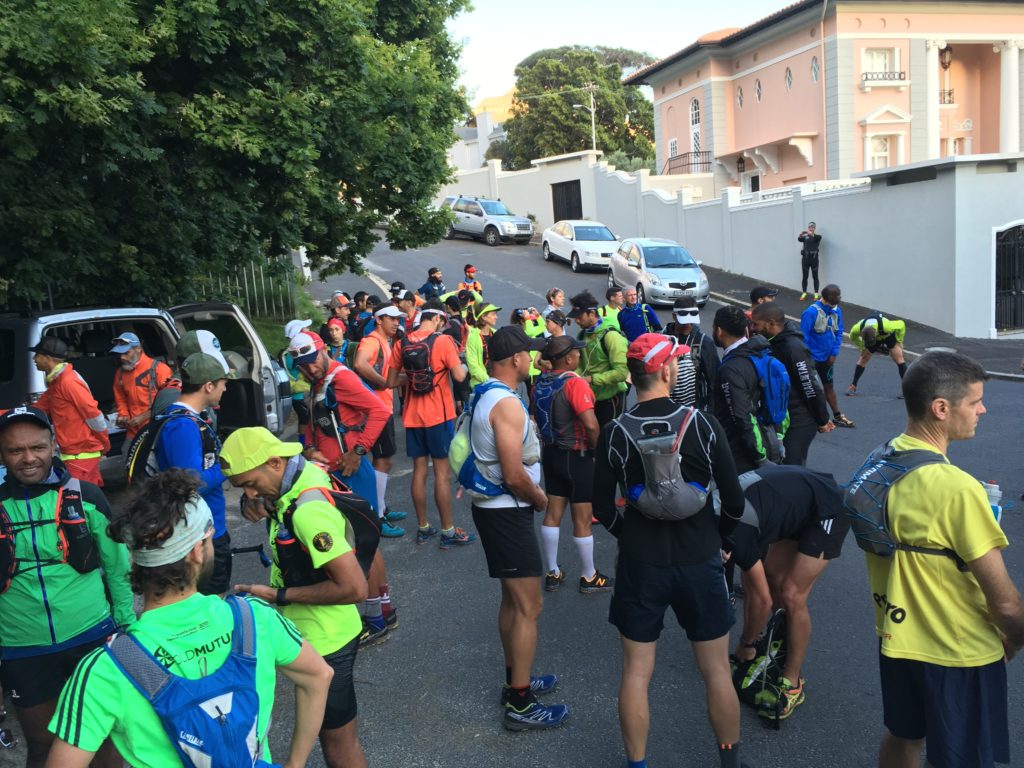 A massive turnout for the 35 km UTCT recce 2

I felt strong and went with the fast group again. This time it was easier for me to keep up and even get some recovery time, since I was not always in the back. Our first group was about 15 runners strong, while the second (slower) group had about 50 runners.

Going up Table Mountain was fine, since I did that several times in the last few weeks, but it was cold and windy. We had clouds and mist almost all the time, so there was not much of sightseeing this time. Which was a pity, since we would have had amazing views. 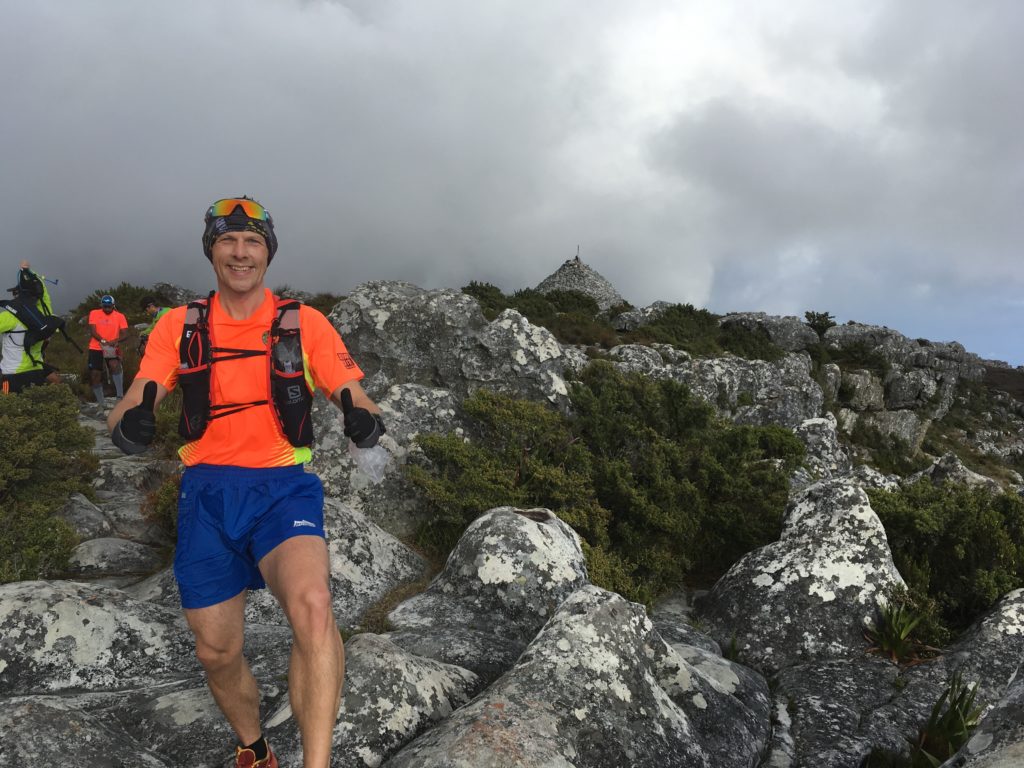 I really enjoyed the company, got to know a few other fellow runners and we chatted a lot – making it easier to handle the tough run.

But the real challenge was yet to come. After 25 km we got to Rhodes Memorial, where Stu (one of the UTCT organisers) waited for us with water, food, Red Bulls. We were already exhausted, and now the 600m elevation gain up to Blockhouse was on the list. I was asking myself, why they chose this part. There are so many other nice trails… 😉 so why on earth climb up here???

You can tell from the picture how exhausted we were… 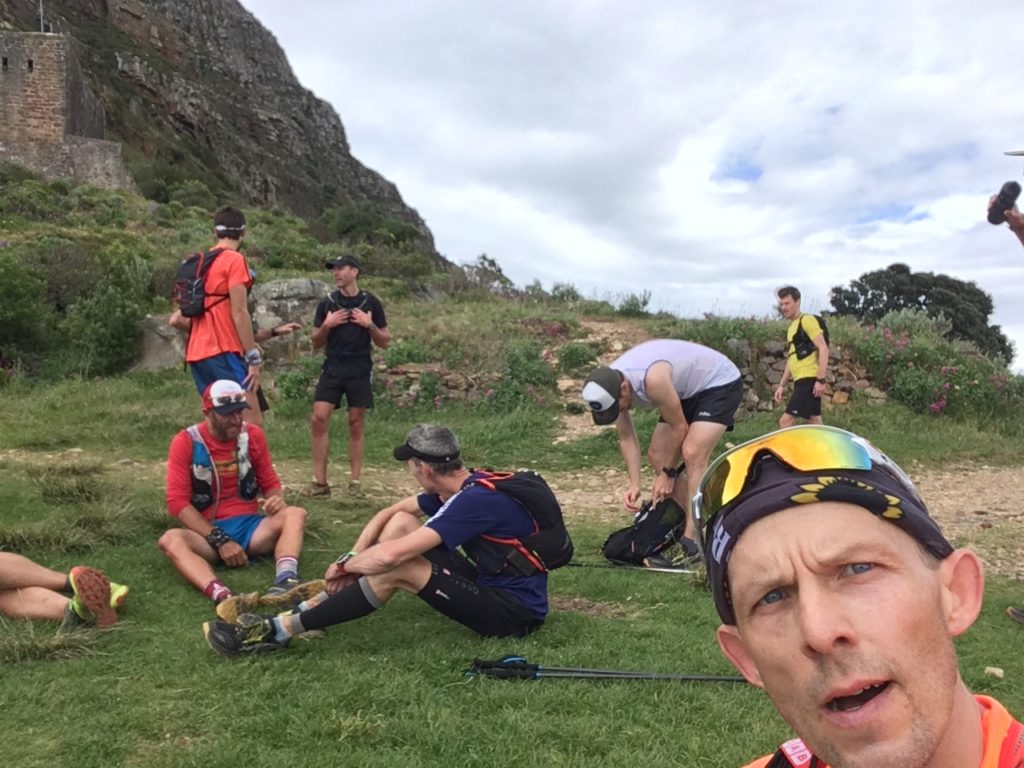 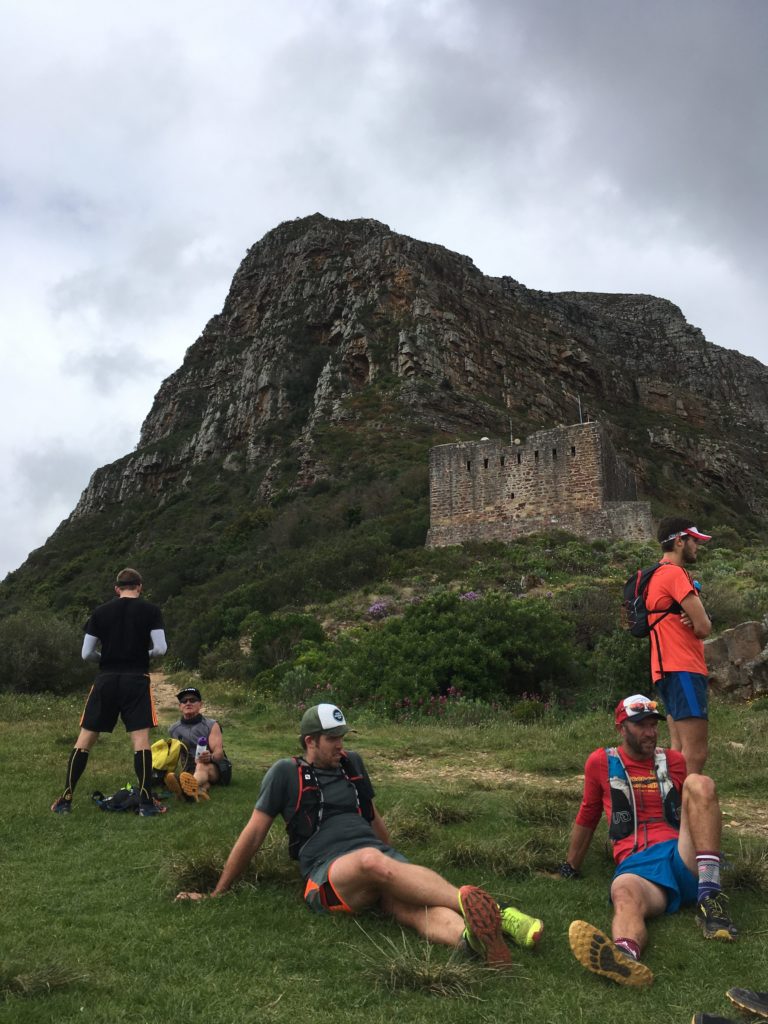 While we climbed all the way up, I had one thought in my mind: This is already tough after 25 km of running. But how on earth will I get up here on race day, with 90 km and 3500 m elevation gain in my legs??? I have no idea!

Eventually we made it to the contour path and the last section was lovely and nice to run.

My learning from this recce was: My fitness improved since the first recce, I am more confident on the trail and again I was able to keep up with the fast group. But I have no idea how I’ll get through the race, especially with only 17 hours until cut off. This doesn’t give you any time to waste, if you are not a top runner.

The next day I was very surprised since I did not suffer from sore legs at all. Seems like the training is paying off.

My final recce would lead us along the route only used by the 100 km UTCT runners (there is also a 35 km and a 65 km route), and along areas I have never been before. Again a massive turnout with approximately 70+ runners.

I felt really strong this time and ran within the top group most of the time. This was very beneficial – since I had so much more time to recover, when we waited for the other guys. A huge advantage 🙂 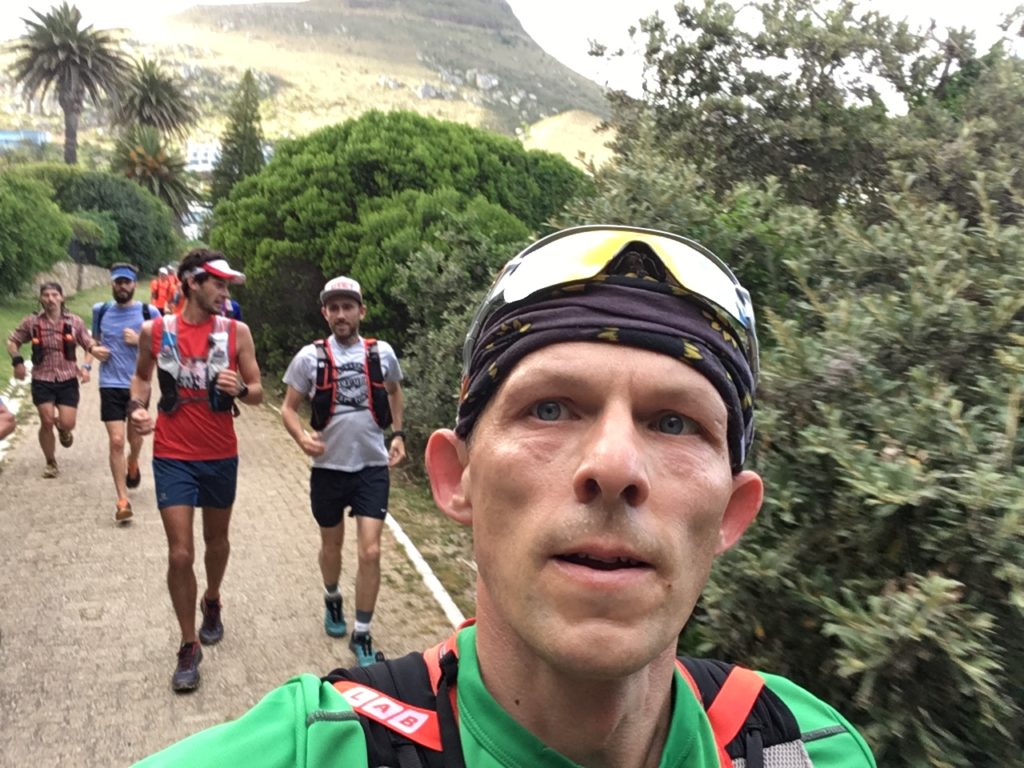 On our way to Llandudno beach 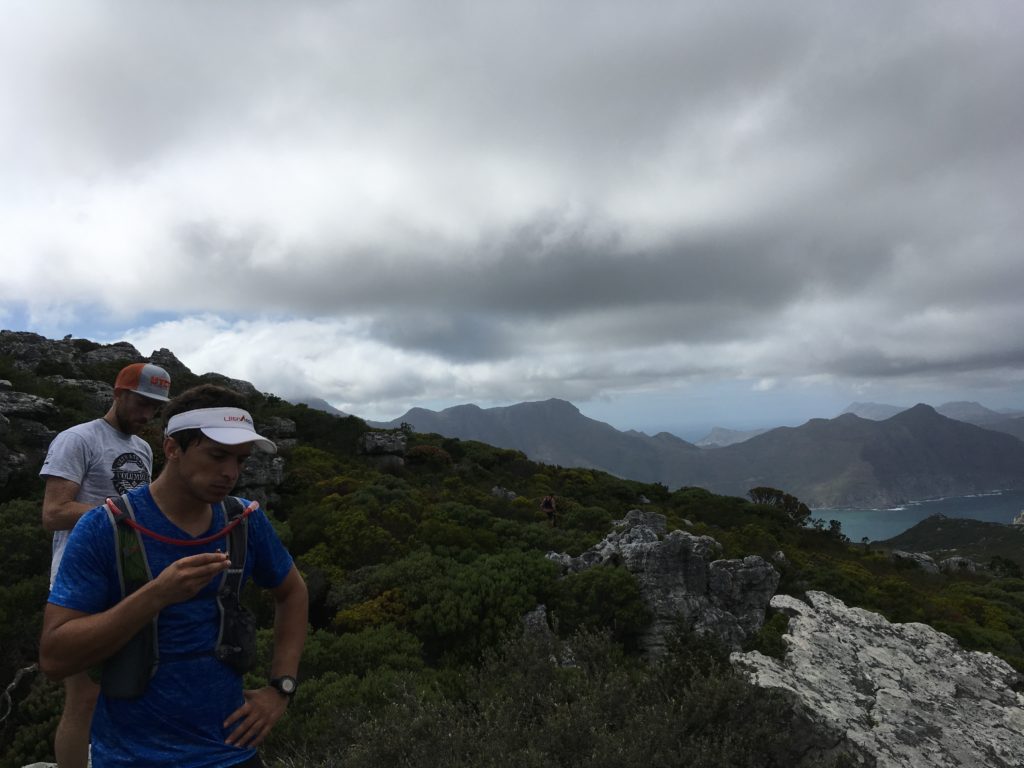 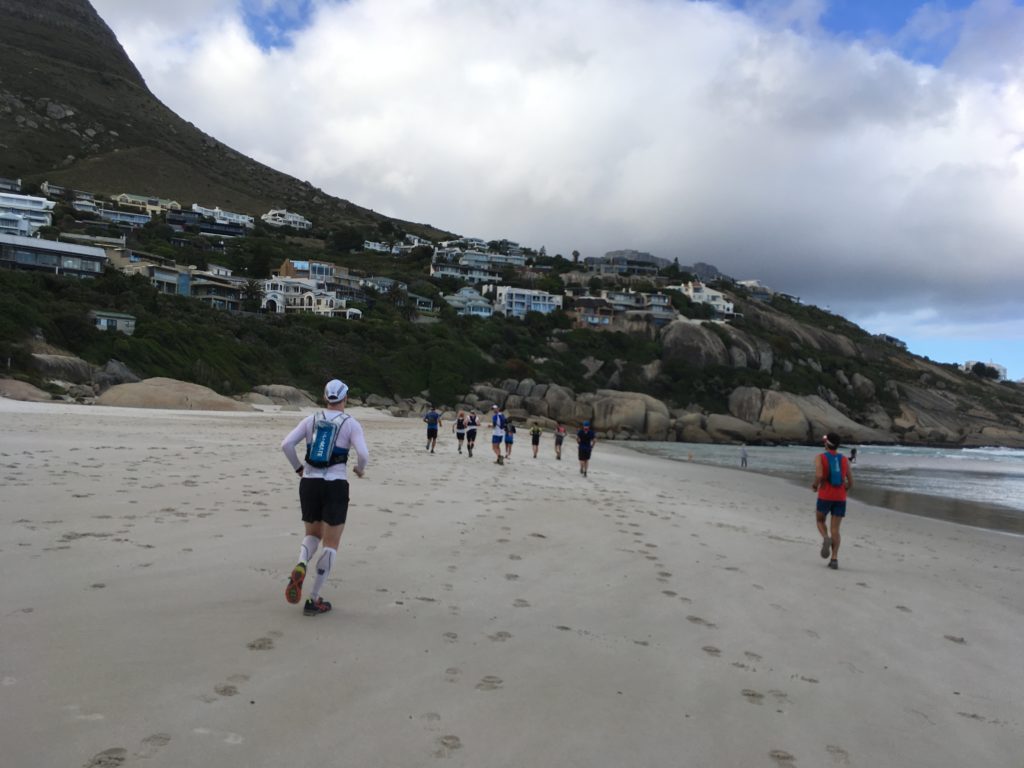 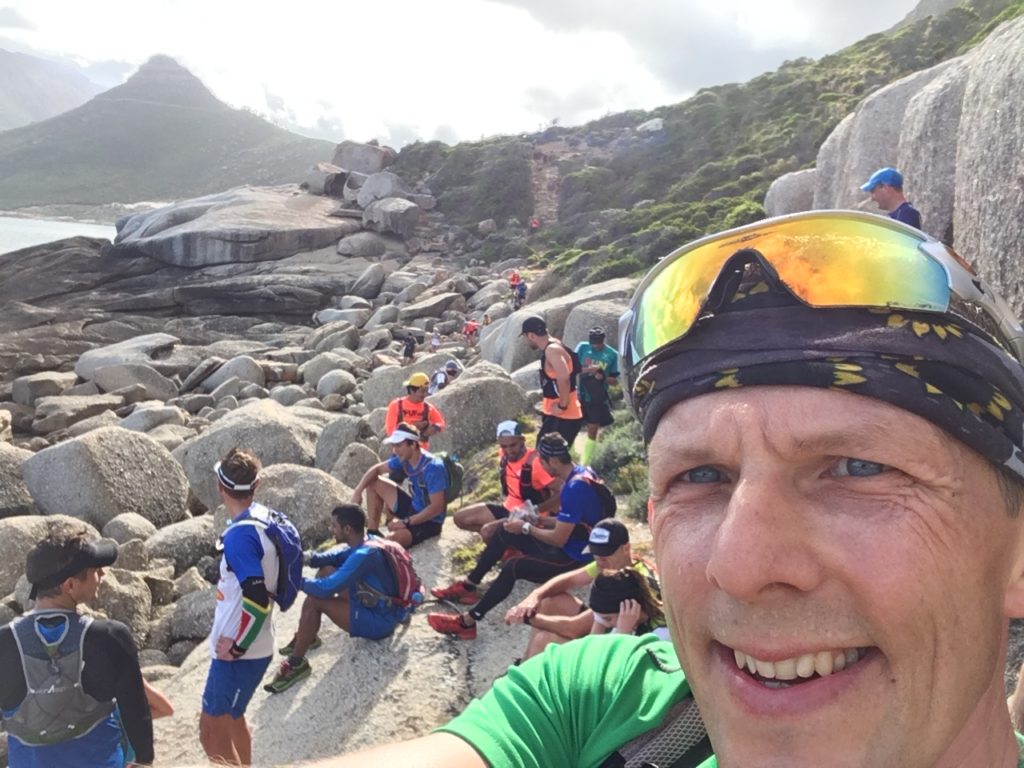 Taking a break before heading up to Suther Peak 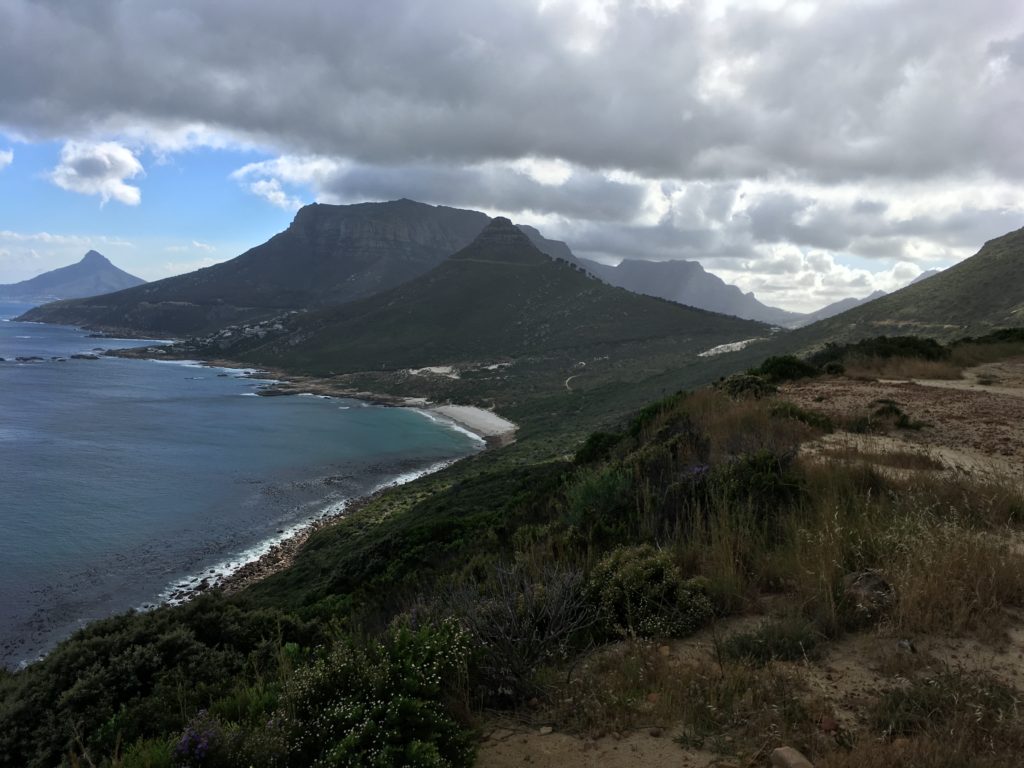 Stunning views on our way to the top of Suther Peak – Llandudno, Hout Bay

The 700m+  climb up to Suther Peak is more mountain climbing than running, and quite challenging. On race day we will hit this part after some 45 km and the sun might add another element of difficulty. But the views are stunning – if you stop to enjoy the view. It is impossible to enjoy the view and move forward – way to dangerous. 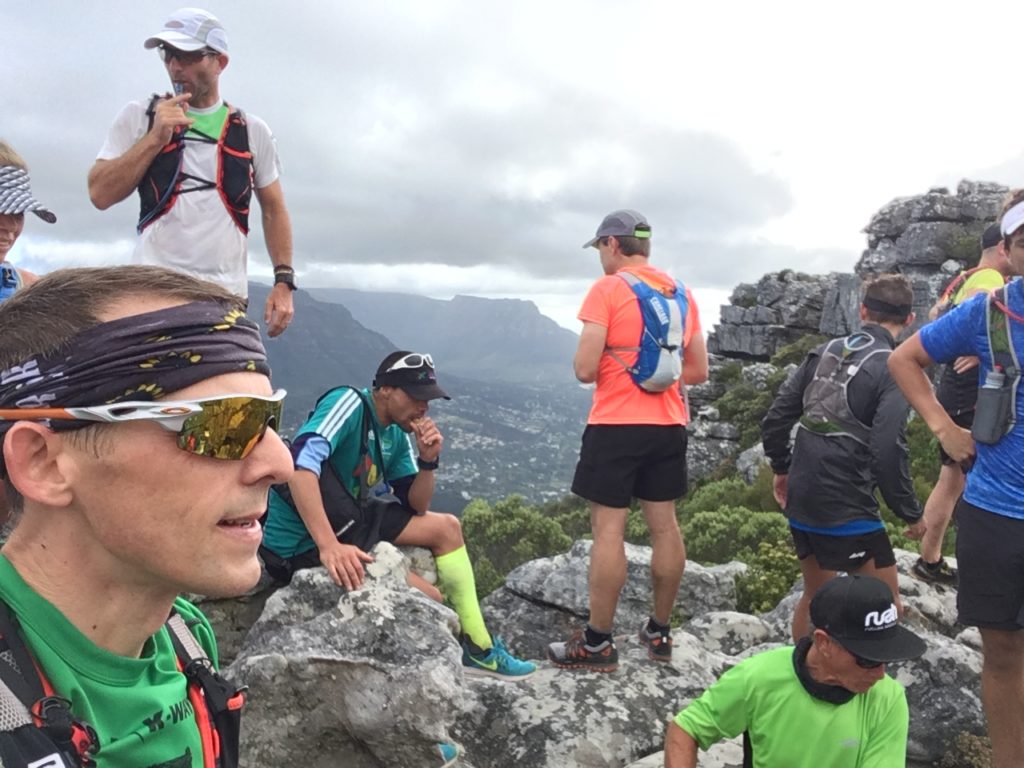 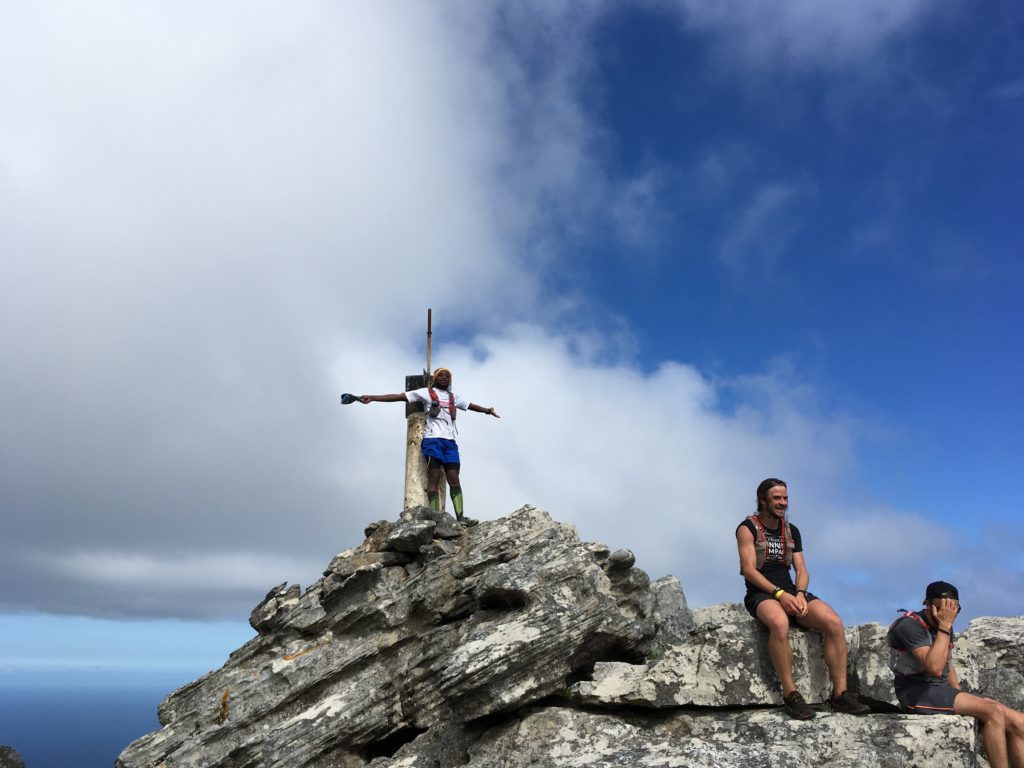 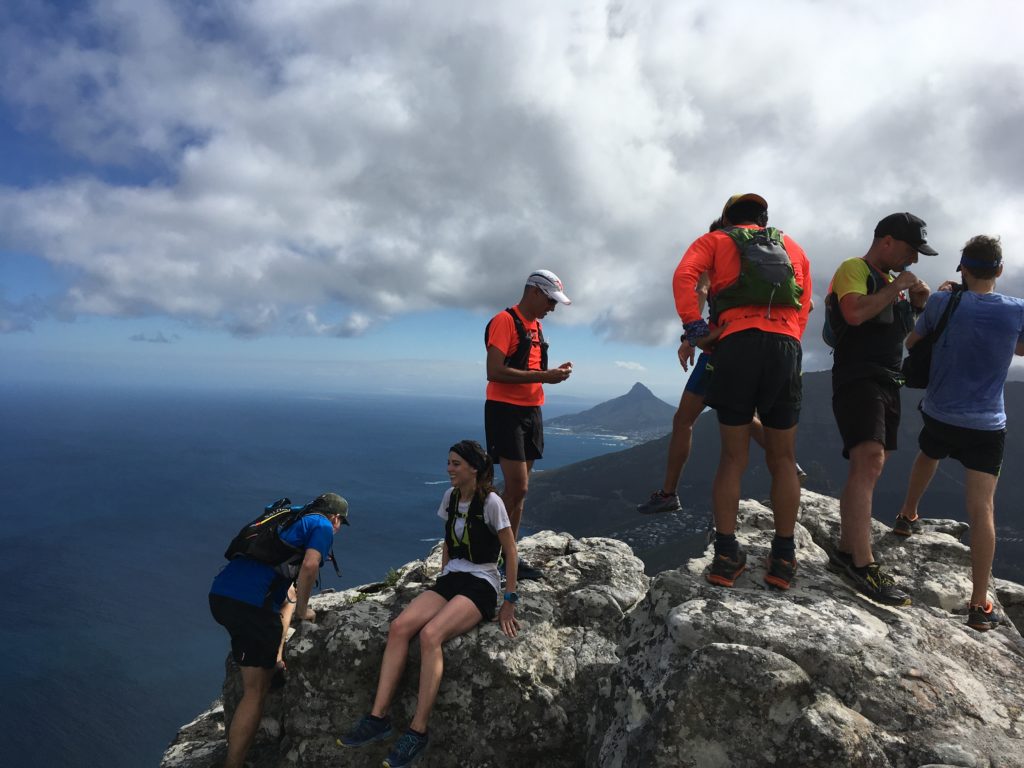 After another break on top of Suther Peak, which is not for people with fear of heights, we raced down to Hout Bay. Here I could really see how much my trail running improved. I was able to run fast, confident, and enjoy it.

At Hout Bay Harbour another break at a Fish and Chips stand, where I was happy to get some Coke and other Sugar Water which I would never, ever drink in my normal life – but during such an exercise, the body simply needs nutrition. 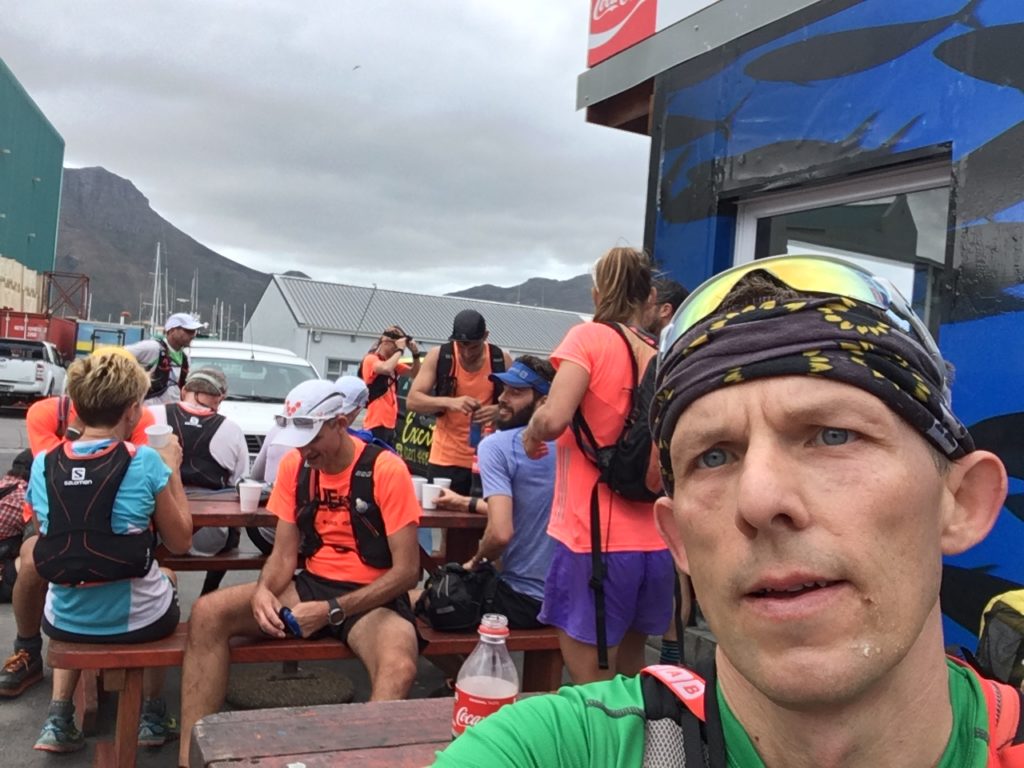 Nutrition was also something I paid much more attention to during this recce. I ate almost every 20 min or so (home made date balls, Butta Nut squeeze packs, Racefood). Nutrition will be, apart from the mental aspect, the make or break factor on race day. You can’t run for 17 hours if your nutrition is messed up – and if you wait until you are hungry, it’s already over.

The final stretch from Hout Bay harbour turned into kind of a race, when a few guys really put the hammer down, running the uphill road sections at 4:30 min/km and faster. Eventually I slowed down, and still managed to get back to the start in less than 4 hours 🙂 and amongst the first 10 runners.

I was extremely happy with my performance, nutrition and running this time.

My respect for the race even grew, but I am sure it is going to be good. 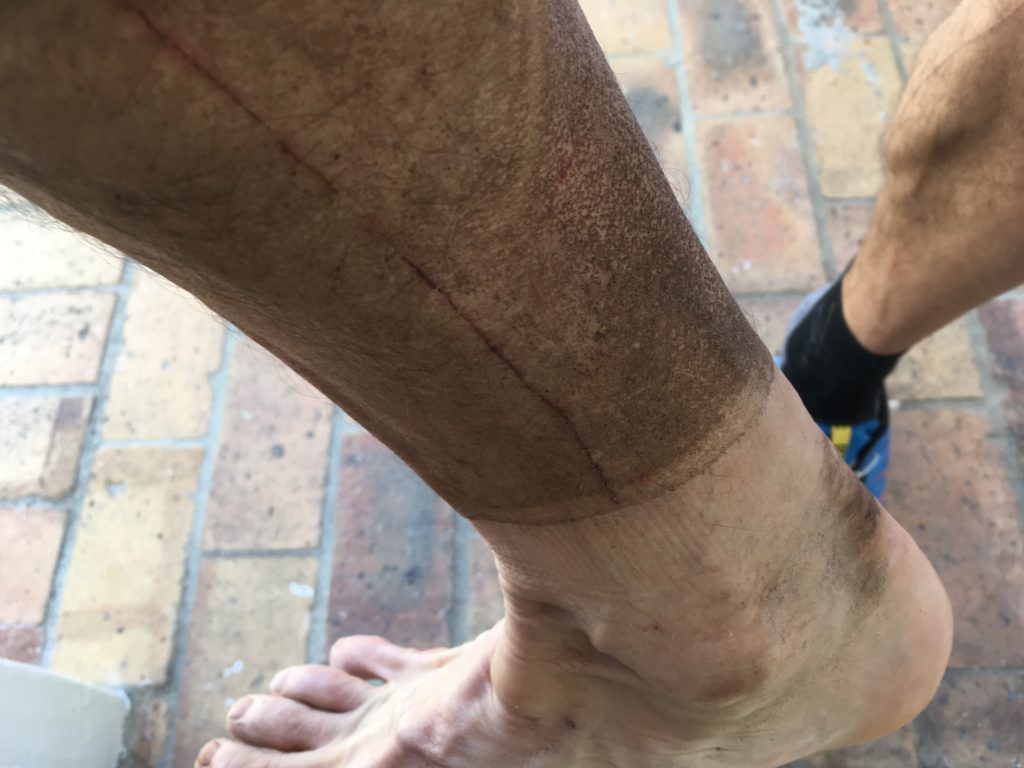 My legs after the 32 km trail run UTCT recce

A massive thank you to the organisation of Ultra Trail Cape Town for investing so much time and energy in giving us runners the opportunity to get to know the route and other runners – all for free!