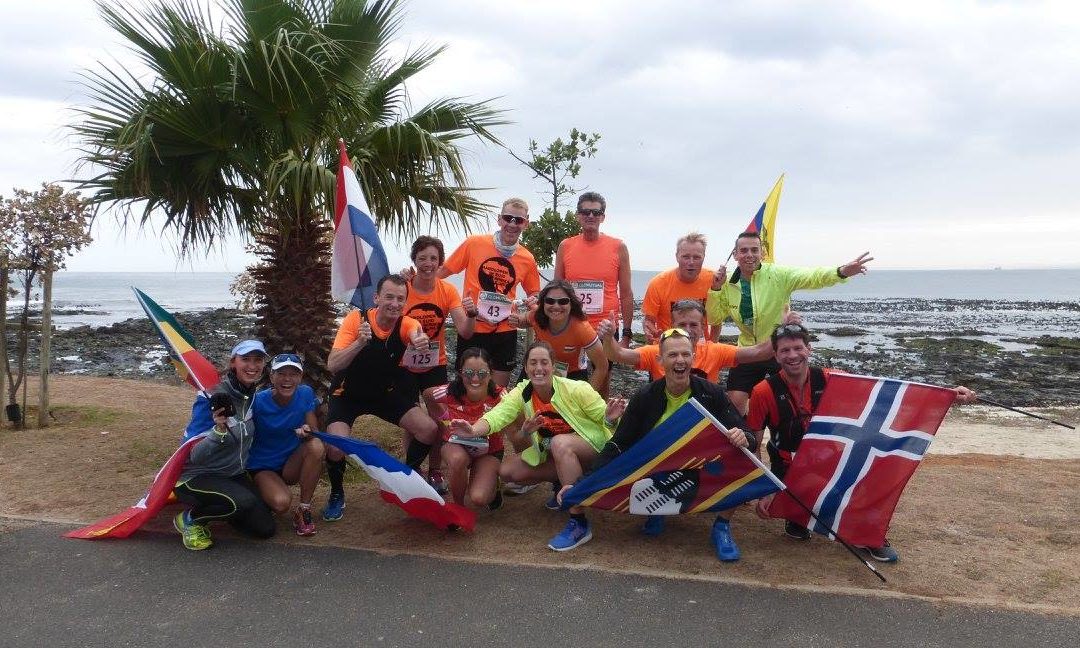 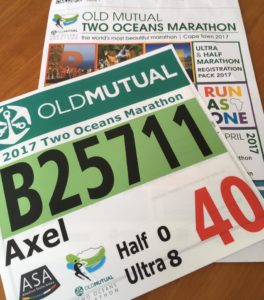 Being able to run my beloved Two Oceans Ultra Marathon (56 km) for the 9th consecutive time is nothing I take for granted. I’m grateful to my stellar physio Iain Sykes. He gave me the confidence after my UTCT injury in December, that I could recover for Two Oceans. He gave me the perfect treatment plan and step by step guidance on how to get back to running. And it worked perfectly. Thanks Iain!

I decided to turn 2017 into a rest year for me. Apart from taking part in the Two Rivers Marathon in Holland (in snow, wearing shorts 😉 you should read the story) and the Two Oceans Marathon I have not signed up for any other race. This felt WONDERFUL during the build up to Two Oceans. No pressure, no training plan, doing the basics and having fun on the way.

Training reduced to the bare minimum (in my terms)

For the past 8 years I was on a very strict training schedule before Two Oceans – and many times Comrades as well. I’m German, I stick to my schedule 😉 After finishing Two Oceans 8 times already, I knew what I needed to do as a bare minimum to have the fitness level to finish the race without being totally exhausted.

I ran 3 times a week, two shorter sessions of 10 – 15 km and one longer session of 30 – 40 km. I know from the past that those longer sessions are my foundation for a good race. In total I ran close to 700 km between 1.1.16 and race day. I knew, that I could finish in the range of 5h 15 min – 5h 30 min. And this is absolutely fine with me. Remember: Being able in terms of health and fitness to run such a race is a win! You can find my training schedule for my 2017 Two Ocean Ultra here.

The day before race day is celebrated with the international friendship run. A big gathering with a huge number of nations and runners from around the globe. Due to the close bonds with the dutch running community, especially Marco’s and Ed’s group, I very much enjoy this easy 5-6 km jog along the ocean. It’s more a “let’s run to this spot, it’s nice for a picture” than a real run. And that’s good. 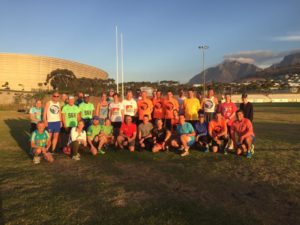 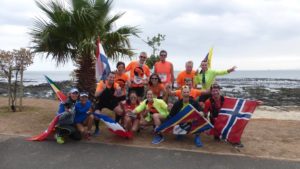 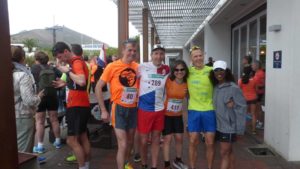 Meeting and making friends at the Friendship Run

The race and my strategy

In total contrast to the weather forecast, we had lots of wind in the morning. My wife, going for her 8th Two Oceans Half Marathon was freezing when we got to the start at 4:55am.

I covered myself in a space blanket and this was awesome. I sat in my seeding area and wrapped the blanket completely around my body. No chance for the wind of getting through. Great!

Even for the ninth time, hearing the two final songs of Shosholoza and the National Anthem just before the gun goes off, is always a goosebumps moment.

I don’t have too much to say about the race. I took it easy and enjoyed the time out on the road. I met a couple of friends on the route, like Marius Kieck on his first Two Oceans, club mates Jana and the legendary Mark Wagenheim (39th Two Oceans). Right after the start a guy passed me, turned around and said: “Hey Axel, I love reading your blog”. Great feeling, thanks bud!

Anyway, first half went great, I was pretty quick (2h 31min) but I knew a sub 5 was not possible. The way up Chapman’s Peak was wonderful, I took one walking break and stopped to take a picture of an international runner who took tons of selfies on the way up.

The big disappointment also happened on our way up Chapman’s Peak drive: My beloved water table, where they used to have fantastic music and an exciting atmosphere, was not there. There is no water table anymore between the bottom of Chappies and the top :(. This is not really an issue regarding water supply, it’s only a pity since it was always so upbeat there.

Anyway, I carried on, the wind was ok and actually nice to keep us cool. As always I was very cautious not to fall over the cat eyes – I saw at least 4 people on Chappies alone tripping over these cat eyes. On the way down I held myself back and kept going. I started feeling the distance after 38 km or so. But I had no pressure, so I did 1 or 2 walking breaks on the undulating road towards the marathon mark. From then on I slowed down a bit and on my way up Constantia Nek I walked for 2 km until I reached the top. And was still faster than many runners trying to run 😉

From the Nek on I felt a slight tendency of cramps in my inner right thighs, but nothing too bad. The final kms were pure joy and eventually I finished in 5h 25 min. This is my slowest time of running on my own (the two finishes in 5h 55 min were the years were I paced a group or a blind runner). I’m happy with it.

At the finish I was happy to see my wife and receive my medal.

Congrats to DHL South Africa for the best tog bag service I ever experienced! The DHL folks waited for us, took our tog bag number, walked to the trucks and returned with the bags. 5 Minutes and I had my bag. What a difference to the nightmare of 2016, when both my wife and I waited for at least 1 hour in the windy and cold weather due to pure incompetence and lack of organisation at the tog bag facility. But this year the new provider DHL did a stellar job.

You guys know how much your feedback means to me. A day after the race I received the following message: 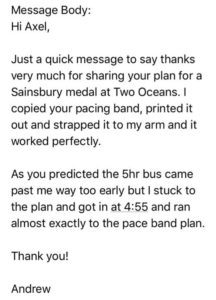 Well done, Andrew and thank you very much for your feedback.

Another good friend, Erik Wolfs from the Dutch running group, also followed my sub 5 h Two Oceans Ultra strategy, and he finished in 4h 55min. At the finish he showed me the wristband he used – it was the one from my blog. He was happy getting his Sainsbury at his second Two Oceans, his wife got her first half marathon medal, and I was very happy that my blog makes other people achieve their dreams. 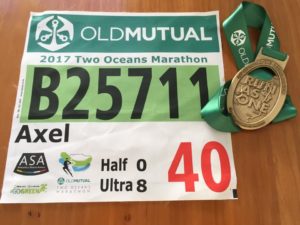 With number 9 in the bag I am now just one finish away from the Blue Number Club. If you finish the race 10 times, you receive a permanent, blue, number for the rest of your life. I can remember how awestruck I was at my first Two Oceans when I saw those blue numbers. It’s crazy that I am so close to receiving mine.

But first I still need to finish another Two Oceans and I hope 2018 will be the year I receive my blue number.

I am writing this post a few weeks after the race. Many of my friends are busy preparing for other races, mainly the 89 km Comrades Ultra Marathon.

And I am SOOOOO happy not to be running any race, especially not Comrades. I run as I like, and I love it. I am going to focus on improving my flexibility and my speed. And run for fun. What a wonderful feeling. What a freedom. It’s crazy to write these lines, as running is “just” a hobby, but it’s also an addiction and an obligation. Especially as an ultra marathon runner.

I love running right now and I am happy to do it as I like, and not as the training schedule dictates me to run. I am sure, if I stay healthy, 2018 is going to be a great year.

Congratulations to all runners of the 2017 Two Oceans Ultra Marathon!

And thanks again from the bottom of my heart to my wonderful wife Silke, who always supports me and gives me the freedom to do my long training runs on Saturday mornings.