Comrades 2014 – Analysis of my race – for the people who love analytics :)

I analyzed the race a bit, and what you can see on the pictures is the data from my Polar RS400 watch. The horizontal scale is the race time in hours:min.

First, let’s have a look at the elevation chart of this years Comrades Ultra Marathon Down Run. You climb some 1,200 m and you drop 1,800 m over a distance of 89.2 km.

You reach the highest point after some 25 km but actually you are climbing up and down almost all the time until Botha’s Hill after some 62 km.

If you look at the upper segment of my pace charts you can see, that I ran very consistent in a range of 5:43 min/km – 6:30 min/km (one exception of 6:58) almost all the time until after4 h and a few minutes. That’s when I walked for abot 2 km a very steep hill before half way point.

I crossed the half way mark after 4h 40 min. And from then on you can see that the pace got slower. This is especially remarkable because after some 62 km (or after about 7h in my case), a long downhill sections starts. But my pace did not improve. It got worse. Downhill…

This is interesting and needs some further investigation.

The thin blue line with the figures represents the pace in min/km.

The dark thick blue line is the pace meassured every 5 seconds.

The following picture includes one additional information: The real pace meassured every 5 seconds. The higher the line, the faster I ran. The lower the line, the slower I was. When the line hits the bottom line, I either stopped completely.

The figures you can see above the little red lines are NOT the km-marks. Simply don’t pay attention to them.

You can tell immediately that I started taking more walking breaks after the half way point. 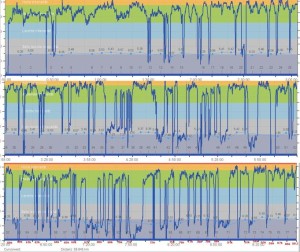 In the third part of the race, I was not capable of running straight for 1 single km.

Can you imagine: You are on a downhill route and you can’t run but have to walk!

From the km mark “31 to go” until “15 km to go” I had the toughest race of my life. Only pure determination and pure will to move on kept me going.

I was so happy when I was able to run for more then 2 minutes without walking. I tried to work with the lamppost-strategy (explained in my Comrades Race Review 2014), but I was so tired, it did not work 100%. What I tried to do is to start running after a km-marker and keep on running as far as possible. Then I took a walking break and ran again whenever possible.

The moment I saw the slightest uphil coming, I tried to run until I reached the bottom and walk uphil.

The last pictures shows the final 3 hours 26 minutes. The little red numbers are the km-markers (more or less). The horror started at km 66…

When I entered this tough patch of the race I tried to calculate, what time I might finish if I would slow down to 8 min/km pace. It took me maybe 5 minutes to calculate. And I am sure, what I calculated was wrong.

There was a time when I thought I might finish in 11 hours 30 minutes. What would still be within the allowed timeframe at least.

With 15 km to go, I felt some energy coming back.

With only 8 km to go, and after a long walking break (betweek 80k and 81k) the mind opened the gates and let my body release additional energy – and I was able to run a bit faster. Still, I had to take walking breaks, but my pace improved. The moment I was able to run from km 84 – 85 without a break, I was soooooo happy!

The question remains: Why did this happen?

I don’t really know. But the truth might be:

Because Comrades is “The Ultimate Human Race” and it will never be easy!

The humidity, which kicked in after 50 km and went to 75%, definitely had an effect.

But for me, three things are important: